The afternoon sky was gray and clear as Unpaid Intern pulled our ZipCar off of the 10 onto Hollywood Boulevard. We cruised up to an ivy-colored building and through its rusty gate. The spot next to us was…reserved. We knew we were at the right place. 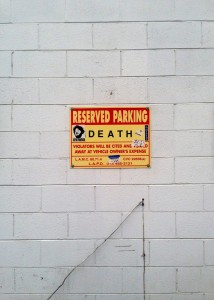 It took months to get the balls, as the youth say, to go to The Museum of Death. From the website, I knew that they played footage of real-life torture and murder. Part of me was afraid that such gruesome imagery would affect me in a way that I wouldn’t be able to foresee–or recover from. But in the end we went forward with the sort of shoulder-shrugging attitude that usually precedes bad decisions. My doubts resurfaced a little as we were purchasing tickets from the predictably creepy receptionist. But by then, he was already ushering us through the velvet curtains into the Serial Killer Archives. We were inside.

The kitschy chandeliers, outdated floral wall paper, and faint smell of embalming fluid made us feel like we were walking through the house of a recently-deceased great-aunt. Each exhibit was stuffed into a small room, so it took time to sort through the cluttered shelves and walls and really see everything. But what the museum lacked in organization or space, it made up for in pure creepiness.

Finally, we got to the last room, where the snuff film was about to play. We sat on a weird couch covered in white satin next to a snarling taxidermic pig who was, according to the sign, named Chaos. Then the footage began.

Up to this point, my morbid curiosity had conquered the sick feeling in my stomach. But this video… I don’t even want to tell you what we saw. You can click this link to read more about it. You know you’re gonna. I did a lot of screeching and swearing and using of Unpaid Intern’s shoulder as a shield from the horrors onscreen. But at least I didn’t throw up on Chaos! The video was definitely the most horrifying element of the museum, except for perhaps the receptionist, who smiled with both his upper and lower teeth and asked us if we thought it was fun.

Having conquered death, we rounded out the day with some less psychologically grueling activities, which included dinner downtown and a visit to the Griffith Observatory. While walking to the cafe, we stumbled on a commercial shoot of seemingly high production value, which made me feel very LA and peripherally famous. And watching a father explain the Big Bang to his toddler in the Galaxies exhibit at the observatory mended any possible soul-damage inflicted by the Death museum.

All in all, it was a quintessential visit to the City of Angels: a campy museum, a run-in with a film crew, and a nighttime view of the valley. 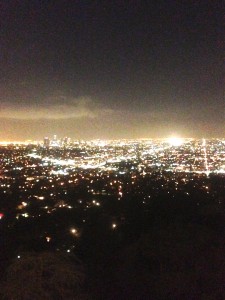