Let’s be honest – walking around campus every single day can get a bit boring. For example, the 20-minute trek up to Harvey Mudd for Pizza Night is great, but sometimes your Spotify playlists just won’t cut it. Here is a solution: some of my favorite podcasts for listening to while walking around the 5Cs:

1. 99% Invisible: This impeccably produced podcast is about the largely unnoticed designs that shape our world, yet we never really think about. Episode topics range from algorithm design to the design of baseball parks. Before this podcast, I had no interest at all in design and architecture, but now I think about it all the time. Trust me, you should listen to this – you’ll learn a lot.

2. Serial (season one): The podcast that got me into podcasts. Season one of Serial is, without a doubt, just as binge-worthy as Stranger Things. It follows host and journalist Sarah Koenig as she investigates the murder of Hae Min Lee, an 18-year-old high school student in Baltimore, Maryland. Adnan Syed, Hae’s ex-boyfriend, was convicted of the murder, but there are aspects of the case that just don’t make sense. Koenig goes into the nitty-gritty details of Hae’s murder and the case against Adnan over 12 riveting episodes. That walk up to the Motley for a chai latte will go by in a flash.

3. My Favorite Murder: This comedy and true-crime podcast is hosted by two fabulous ladies, Karen Kilgariff and Georgia Hardstark. Comedy and true-crime–weird combination, right? But they make it work. These two best friends each pick a murder or survivor story to recount to each other, using the podcast as a type of therapy to deal with their anxieties about murder and other violent crimes. The bulk of the podcast is improvised discussion between Karen and Georgia, and they are hilarious. I audibly laugh out loud at least once an episode.

4. Dear Hank and John: This is a comedy advice podcast between author John Green, best known for The Fault in our Stars, and his brother Hank. If you’re worried about not liking it because “ew, John Green is so cliché and for middle schoolers,” fret not. John and Hank are a hilarious duo, and their responses to listeners’ emails range from sincere and brilliant to absolutely irrelevant and humorously dumb. The Green brothers are definitely worth listening to–you’ll laugh a lot and actually learn some stuff along the way.

5. S-Town: A beautiful investigative journalism podcast made by the producers of Serial (#2 on my list), S-Town follows Brian Reed as he investigates a murder in Woodstock, Alabama at the urging of John B. McLemore, a local horologist who despises his small hometown. Brian and John befriend each other over the course of the episodes, and eventually the podcast becomes more about John and his life story than about the murder investigation. As Kate Waldman (a critic for Slate) put it, S-Town is more like “aural literature” than anything else. It’s really special.

6. Criminal: This true-crime podcast reveals “stories of people who’ve done wrong, been wronged, or gotten caught somewhere in the middle.” Each story focuses on a new topic, ranging from a mother-daughter coroner team, to a woman who discovers that her late-mother stole her identity when she was a child, to a man who was caught counterfeiting money using a regular printer. Each episode is fascinating and incredibly produced–HuffPo called it “the best new radio show in America” for a reason.

7. Radiolab: Radiolab is honestly hard to describe. The hosts describe it as “a show about curiosity,” which is pretty vague. The episodes blend together science, philosophy, and the human experience. Episode topics range from the philosophical implications of driverless cars to a girl born in rural Texas who, based on a lack of legal documentation, doesn’t exist. There are a ton of episodes, and each one is about an hour long, so you’ll have plenty of listening material once you get hooked. 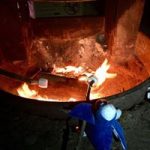 8. Lore: This podcast outlines the history behind common scary folklore. If you’re looking for a podcast that will legitimately scare you, this is it. The podcast style has been compared to sitting around a campfire and hearing scary stories–except this time, the scary stories are based on truth. Host Aaron Mahnke narrates the folklore behind vampires, the original story about dolls who come to life, and much, much more.