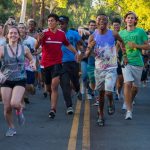 A year and a half ago, amidst roaring cheers and flashing cameras, the class of 2020 ran through Pomona College’s stone gates. Of the four hundred and eleven new faces, I was the only student from the Philippines.

I felt a little special, yes, but also a little lonely. I realized no one else grew up like I did: bowls of sinigang, nights of karaoke, and streets of traffic. Suddenly, I felt each and every one of those seven thousand miles between Manila and Claremont.

Until one day, there was a knock on my door. 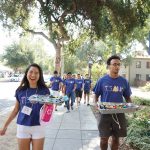 Mine was Sam. Holding a chocolate cupcake in one hand and a handwritten letter in the other, she gave me a hug. “Welcome to Pomona,” she greeted with a smile.

Sam grew up in Hong Kong. Like me, she was Filipina. “Let me know if you want to watch teleseryes (Filipino television dramas), if that’s your thing,” she had written.

A day later, I was at my very first sponsor group dinner. In an attempt to break the awkward silence, my sponsors asked each of us to share our favorite food. After a series of “pizza” and “cheeseburger” responses, someone said “halo-halo”.

Halo-halo was Sophie’s favorite food. Sophie was a Filipina-American who grew up in Seattle, but now lived a few doors down from my room. Her last name was “purple” (in Spanish), her earrings were red, and her tote bag was yellow. Halo-halo. 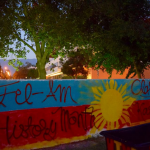 Two weeks later, I was at my very first a capella group rehearsal. One of the new altos-Norani-was a Filipina-American from Los Angeles. Whereas I was looking for the most painless way to get rid of my science requirement, Norani wanted to go to medical school.

However, we had one thing in common: we loved to sing.

Sam, Sophie, and Norani seemed familiar, yet they were also very different. For example, Sam and I could not identify with Norani and Sophie’s immigrant experience in the United States. In fact, as someone who grew up in the Philippines, I couldn’t even relate to much of Sam’s upbringing. Yet through mentorship programs, sponsor groups, and clubs, I eventually found a piece of home in each of them.

Sophie and I waste time by discussing political ideologies in the Avatar universe.

Norani and I perform a duet on Stevie Wonder’s “Isn’t She Lovely.”

Manila, Hong Kong, Seattle, and Los Angeles all converged at Claremont-members of a worldwide diaspora forging a transnational community, even just for a few years.

I was never alone to begin with.