Pomona wouldn’t be Pomona without the Claremont Consortium. The collaboration and sharing of diverse ideas, beliefs, and approaches to education that comes with working so closely with the other schools makes Pomona’s participation in the 5C system integral to what it means to be a Sagehen.

Pomona’s home in the Claremont Consortium sets it apart from other comparable liberal arts schools. The Claremont Consortium, which consists of five undergraduate colleges (Pomona, Claremont McKenna, Pitzer, Scripps, and Harvey Mudd) and two graduate institutions (Claremont Graduate University and Keck Graduate Institute), was envisioned with Pomona’s founding in 1887. The founders intended for Pomona to be part of a group of small, independent colleges that could share resources while maintaining distinct academic identities, similar to the university systems in Oxford and Cambridge. Since the addition of the four other liberal arts colleges, this dream has been realized.

The Consortium, also known as the “five colleges”  or “the 5Cs” (or 7Cs, if the graduate schools are included), is different from its east-coast consortium counterparts because our campuses are physically adjacent––literally. The 5Cs are all within one square mile, making it easy to walk, bike or longboard between campuses (no one drives because it would take longer to park than these other methods). 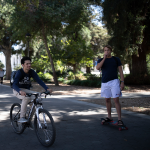 Claremont students share a library, health services, campus safety, and a whopping seven dining halls (you will not find this student:dining hall ratio at any other liberal arts college!). In addition, students can take classes at the other colleges and participate on one of two athletic teams (Claremont-Mudd-Scripps or Pomona-Pitzer), as well as about 250 5C clubs.

And this mixing happens while the colleges maintain their unique identities, administrations, majors/requirements, and campus cultures.

The Consortium is a daily part of my life at Pomona. Last semester, I was a regular at each of the five schools. I had a Spanish class at Pitzer, a good friend I would regularly visit at CMC whom I met through Pomona’s Oldenborg language lunch tables, weekly meals at Harvey Mudd with friends, and club rehearsals at Scripps. Last summer, I was part of a psychology research project with faculty from Claremont Graduate University and Pomona.

My involvement in Consortium life amped up my second year at Pomona when I joined the improv comedy group “Underground Theatrical Institute” (UTI for short––ha-ha––we like to think we’re funny). 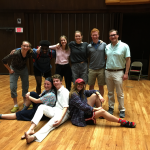 My involvement with UTI has been one of the most treasured parts of my time here at Pomona. With members from across the colleges, we rehearse and perform 5C-wide, bringing our wacky, “out-there” improvised comedy to a wide range of students. I have made lasting friendships with the UTI members from other schools and learned more about the cultures of the other colleges. Being in UTI has shown me that there are few things more important than fostering, maintaining, and celebrating the kind of community that spills across The Claremont Colleges.