The American government knows me as Magali Astride Cyrielle Leslie Ngouabou Noubissi. The first four are all my first names, and the last one is supposed to be my middle name, but the guy at the social security office (who was somehow in charge of typing out the name I’d have to live with) messed up. As a result, I now have to squeeze even more of my name on margins made for “Smiths” and “Johnsons.”

I often wonder what my name communicates about me. One of my mentors taught me to “flaunt my identities,” but how much can people tell from the moment I am introduced to them? I, of course, never introduce myself with my six names. If anything, my names have become more of a party trick, something handy to whip out in a game of Two Truths and a Lie, terms to say five times fast without taking a breath. 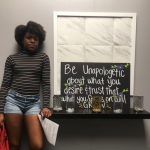 Low-income, black, immigrant, cis woman. My legal name is longer than the elevator pitch for my underrepresented identities, but I always wonder how much attention it really draws. I feel like my name is a run-on sentence at the beginning of a promising book: engaging at first, but as soon as you register the unnecessary length your eyes glaze over, absently letting the brain fill in the gaps, hoping the story that comes after won’t necessitate the fine details missed.

Coming to Pomona as a Questbridge Scholar, presenting these identities in a meaningful way, was a large focus of my application. My job was both to make the admissions officers look beyond my legal name but also to see that every facet of this drawn-out name had value. I had to show that this name would go places, that the weight of its length wouldn’t hold it back from being displayed on books, or featured in articles, or rolled past in an end-credits scene.

Presenting these identities to a progressive, liberal arts institution came with fewer obstacles than most. The Claremont bubble has often allowed me to forget that the rest of the world isn’t all too accepting of all the identities that have shaped me and continue to influence my trajectory in life. In fact, one of the biggest reasons I applied to Pomona was because I had read an article about a student who was so much like me and who was also able to find her home at this college.

But as I (and probably the girl in that article) have accepted and will have to accept, introductions for every other facet of our lives will take so much more energy to present with pride. Walking into career fairs, interviews, and auditions with afros or weaves or braids is, without a doubt, a statement within itself (you can probably count the number of black women in high offices who wear their natural coils out).

That’s why so many of us find ways to conform. It doesn’t mean every black woman with a blowout is a sellout or a bad person. If anything, that’s demonizing the person rather than the problem, and underrepresented groups have had to face enough of that.

Whether you have changed your accent to hide the fact that you’re an immigrant, or warped your name to suit someone else’s mother tongue, or laced your hair with harsh chemicals to unravel the locks by which people have judged you before even stumbling over your name, I want to congratulate you. For those who have survived without doing any of these things, good for you. We have all found our own ways of getting to this point, and we’re still growing beyond the person we were yesterday, pushing to an even further point.

In all honesty, I don’t know if I want to live with Magali Astride Cyrielle Leslie Ngouabou Noubissi forever. Yes, it is strength. Yes, it holds culture. Yes, it reflects family and love and all those wonderful things, but underrepresented peoples have enough to carry on their backs. Not every battle has to be fought and won with every inkling of symbolism or each embodied rebellion.