For those of you who don’t have a lot of contact with Mormons in your life, let me explain. General Conference occurs once every 6 months (the second of this year was last weekend), and my roommate describes it as a weekend when “really smart men talk about everything.” 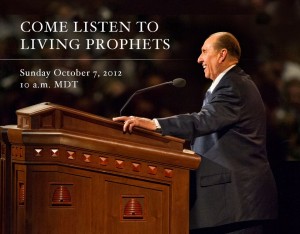 More specifically, Wikipedia defines it as, “a meeting for all members of the church for conducting general church business and instruction.” And since not everyone can be in Utah, they broadcast a stream over the internet.

Oh, so, if you didn’t pick up on this earlier, my roommate is Mormon. Thing is, being around Mormons isn’t new for me. There’s a rather large community of Mormons in the town I grew up in, and I’ve always been exposed to the religion and gotten along well with its followers—heck, some of them are my closest friends! I was actually relatively confused when someone made a joke to me about Mormonism and polygamy, because I just didn’t have that stereotype in my mind. My Mormon stereotypes included dressing modestly, not swearing, not watching R-rated movies, and not drinking caffeine. Oh, and being really nice people.

Back to General Conference. So, my roommate was a little behind on the live feed, but was watching videos in a timely fashion to attempt to catch up. She was occasionally serenading my with hymns (even though she was listening through headphones).  For the record, I absolutely love this girl.

Thing is, I was on facebook and saw one of my Mormon friends from home post something about going on a mission early. For those of you who aren’t well-acquainted with Mormonism, at age 19, boys are (highly) encouraged, though not required, to spend 2 years in a place in need of a missionary, studying and spreading their beliefs. Girls are allowed to go at age 21 for 18 months, but this is much less common than boys. But no longer!

Because then I saw a post by a Mormon girl on facebook saying she could go on her mission now. …what? I asked my roommate about it, and she had no idea (being slightly behind in the webcast). We immediately googled. At General Conference, they had announced that boys can now go on missions at age 18, and girls can go at age 19.

Ok, so for boys, that’s only a year earlier. But, I think it’s slightly more practical because then they don’t end up going to college for a year, leaving for a 2-year mission, and then returning 2 years behind all their freshman year friends.

But for girls? This is a big deal. My roommate could leave as soon as early summer. To go on a mission. For a year and a half.

This prompted much discussion of religion, life plans, service, obligation, and more.

It’s a lot for her to think about. I just find it kinda silly that I, the non-Mormon who apparently just has tons of Mormon friends, knew about this immense change before my Mormon roommate.

But despite my nonparticipation in the religion, such changes interest me. And I absolutely love discussing them with others. I simply love to ask questions about different religions and attempt to understand their perspectives. In my humble opinion, I think it’s a good way to go about life.