In honor of Pomona launching its own awesome, interactive timeline, I’m going to share with you a timeline of my own. This is the timeline of the visit of my cousin (and best friend) Laura and friend Vincent from Notre Dame.

It got awfully confusing to explain them to people, because Vincent and I went to high school together in Washington, and now he’s a sophomore at Notre Dame. My cousin Laura, however, is from Kansas, and is now a freshman and Notre Dame. They have a week long fall break and decided to spend it with ME!

Now that you’re all informed…

They arrived a week ago. I was unprepared for this, being all wrapped up in (another) busy week. Nonetheless, they came. Arriving at the Ontario airport rather late at night, Vincent participated in an Humans V. Zombies (HvZ) night mission with me (where I occasionally lost him, but he’s so outgoing and wonderful he managed without me. He also now knows the layout of Mudd-Blaisdell pretty well.), and Laura and I visited my sister’s apartment near the airport.

The next day, they watched the Notre Dame v. Stanford game, sad they were missing being with all their friends even though it was pouring down rain and looked miserable. I guess I just don’t understand football… Still, Notre Dame won in overtime, and is undefeated, which is pretty exciting (I guess). I didn’t watch the game; I did work, so hopefully it would free up more time to have fun with them in the future. That night, I forced them to participate in the FINAL mission of HvZ. I was a zombie, so I borrowed the bandanas of people who would’ve been zombies but were just too lazy to show up and play (*cough, LAME, cough*). It wasn’t cheating. I wasn’t adding to our numbers, just substituting. And even though the outlook for the outnumbered zombies looked very pitiful and pathetic from the start, we came back to DOMINATE. Eating human brains never felt so good. 🙂 I was slightly afraid my friends wouldn’t be into it, and I’d just be forcing them to participate, but we all had a blast! And then showed up sweaty and gross, with a friend who was formerly a human with a large Nerf gun, at a Stand-Up Comedy Show in Doms lounge.

SUNDAY! is the day of rest… right? Nope. Because this Sunday was particularly special. This Sunday was Frank Brunch and FOUNDERS DAY!!!!! Our quad was overrun with free things, tables covered in brightly-colored stretchy things, a carousel (which is coincidentally identical to a “merry-go-round”), and people from the community. We got airbrush tattoos, photobooth pics, and birthday cake. OH! One of the coolest parts? Inside the free dinner picnic boxes, there were fortune cookies. Inside the fortune cookies, there were POMONA-specific fortunes. They were hilarious.

Monday—Laura came to my badminton PE class. She’d never played before. It was a hoot. She also came to Linguistics with me. We watched a video of this British kid speaking with lots of different accents. It was impressive. They came to my radio show!!! On KSPC, from 4 to 6 p.m., called “The Pursuit of Happiness.” They helped me pick music, read PSAs, and even have a moment when we all just made animal noises on air (per Laura’s suggestion). That night, I had to do work (and, you know, go see Taylor Swift perform at Big Bridges), so my sister took Laura and Vincent to go see The Perks of Being a Wallflower. They came back all teary-eyed, and meowed to me about how I should’ve warned them about how sad it was. (I mean, I read the book, but didn’t think it was THAT sad…)

Tuesday—I’m essentially in class from 930 to 4. So my sister took Laura and Vincent to Disneyland. I was slightly saddened I couldn’t go, and contemplated skipping classes, but there was just a lot I needed to do. I met them in the village for dinner at La Parolaccia, which means “the bad word” in Italian, and we got 21 choices for dessert. yum! Oh, and then we fountained Laura at midnight for her 19th birthday. <3 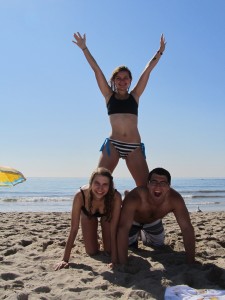 Wednesday—They convinced me to skip class. (which I normally never do, for the record, just ask my friend who didn’t believe I was going to do it till the day of.) We went to the BEACH!!! (The Santa Monica beach.) It was incredibly fun. It was also the first time I’d been to the beach at college, and it happened to be with NO current Claremont Colleges students. Why have we not gone to the beach before this?!? Now I’m a huge proponent, and want to institute biweekly trips. The kids from South Bend, IN were just soaking up the sun. In October. We got Fluff Ice (It’s not ice cream or frozen yogurt. It’s Fluff Ice and it’s delicious) on the way home.

We drove back to campus, showered and shoveled food into our mouths, and then turned back around and headed into L.A. to see The Book of Mormon at The Pantages Theatre. It was pretty hilarious. Afterward, we waited by the side door, and I asked one of the actors to sing “Happy Birthday” to Laura. He did, saying, “I always sing it off-key.” Then, he got super excited about taking a low-quality “selfie” with my phone, telling Laura that she “looked insane.” Pretty hilarious. And on the way home, we stopped at Donut Man (open 24 hrs!!!) for some of the most delicious, hot and fresh glazed donuts I’ve ever had.

Thursday—They slept in, packed, and moved out. But not before I took them to Collins (CMC’s dining hall) for World Wok. Pretty delicious.

Their visit seemed too short, even though it was practically a week. There were so many more things I wanted to show them, but I feel like they got a pretty good taste of my life here. They were starting to know their way around, which I view as an accomplishment. We only didn’t make it to 3 dining halls, and I didn’t run out of flex, which I also view as an accomplishment. They think I never do work and only take badminton classes, which I’m not sure in an accomplishment… Regardless, I loved having them here and showing them how I love being here—at Pomona, at the Claremont Colleges, in Southern California.