Last week I wrote a not-so-happy blog post. This week is going to be much, much different. Because after I wrote out all those feelings last week, I felt better. Just getting it out on paper (err, pixels) made me feel lighter. I wrote that last Friday morning, then went and participated in an experiment run by CGU (Claremont Graduate University). I made $18 for about 50 minutes of my time, so was pretty stoked about that. But that wasn’t the best part.

The best part was that this experiment took place in a building at one of the northern most points of the Claremont Colleges. I walked there along a road skirting the campuses, but decided my route back would be different.

I was initially drawn by the sound of a harmonica from across the street, in the northwest corner of Harvey Mudd College. There’s a little known (at least, by my acquaintances) fountain/river/stream/art installment there. It has a bench. And on this bench, a student was sitting there, playing harmonica. Quite well, actually. I walked through the west side of Harvey Mudd, practically devoid of students on a Friday afternoon (my guess is lab).

I then entered Scripps through the rose garden. Ok, so, I often say I hate flowers. Why give someone something that DIES as an expression of your love? But in that moment, on that afternoon, I would’ve been happy to receive a bouquet from an admirer (shh, don’t tell anyone). The day was sunny, but crisp, and the beauty of the blossoms just made me smile. I decided to indulge myself with a stop by the Motley, purchasing a gingerbread chai tea. I grabbed a copy of The Student Life on my out, folded it under my arm, and continued my way south across the campuses.

I walked through the west side of Claremont Mckenna College (CMC), in the practically-still-sparkly-new Kravis center. It was the first time I’d ever appreciated the offices in that building. They have a wall, which faces toward an inner quad, entirely made of class. One professor was writing on this wall with a whiteboard marker to explain something to a student; through another, I witnessed a quintessential professor-student interaction: a smiling college student walked through the office door and handed a paper to his equally jovial professor. The camaraderie was so thick that, for a moment, I thought I might be watching a commercial or something. But no, just real life at the Claremont Colleges.

I kept walking, finally crossing onto home turf. Starting from Walker Wall on Pomona’s North Campus, I began crossing the steps down to Bixby Plaza in front of Frary only to stop in my tracks. Inspirational quotes covered the steps in rainbow colors of font. No ulterior motive, just messages of happiness. I stood there, silently floating across the steps, until I had read every single one. I took a picture of a few of my favorites to share with you. 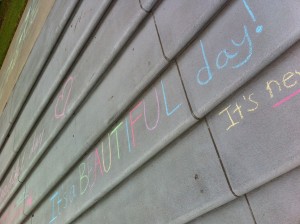 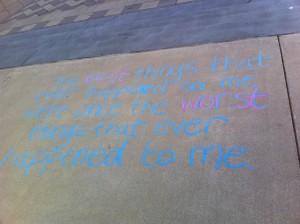 After feeling slightly creepy (but not really caring) with a big smile on my face, standing by myself on the steps, I kept heading back to South Campus. I reached the newly renovated courtyard between Mudd and Harwood dorms, and plopped myself down on a swinging bench. There, I sipped my chai and read my newspaper under a clear blue November sky. (I don’t know what makes a sky characteristically November, but hey, it sounded poetic.) Then, I noticed my friend coming out of our patios (I live in a suite in the basement of Harwood. All our rooms open on to patios. These patios open onto this renovated courtyard. It’s awesome and gorgeous. We refer to it as “our backyard.”), he walked over to my swing, and joined me. I hadn’t seen him in a while, despite the fact that we literally live right next to each other, and he just talked to me about his life for a good amount of time. I felt loved and remembered. Especially entertaining was a tour group of middle schoolers who giggled and wolf-whistled at us as they walked by (because you know how scandalous a boy and a girl sitting on a bench-swing can be.). I wasn’t annoyed though, they just made me laugh. I was buoyant on my own happiness.

The rest of my week and weekend had its up and downs, but for that span of time, I was just all smiles. The world’s so beautiful, and sometimes I think we all forget that. So I advise us all to take time, give thanks, and appreciate everything we have.

(Oh, and don’t worry, I did actually cover all 5Cs because I made it to Pitzer for dinner. SO MANY VEGETARIAN OPTIONS.)