I know that you’ve already read a lot about the election from the bloggers here. But hey, Pomona is a placed filled with numerous politically aware people, so I’m going to share my perspective too.

It’s Friday. No one’s wearing shirts that make political statements, in fact, everyone’s bundled up against California’s version of “cold.” The New York Times website no longer bursts in the colors of red and blue, in fact, the large ad with a picture of a cat and the words “WHY IS MR. WHISKERS SO SAD?” caught my attention more than anything else on the page.

In the last week, students exercised their political right of voting to choose our president (among other, very important things). But now, everything just seems to have returned easily to life as usual.

Let’s rewind a week, and re-enter the political swirl. Over the weekend I was in Florida (yes, random), and was in a bar/lounge Saturday night with a group of 7 Southern Californians who self-identify as pretty liberal people. A very drunk woman starting going around the bar/lounge, shouting “ROMNEY LOVE” and raising her hand for high fives. Now, I being one who avoids conflict would have just ignored her. But others in my group had different ideas—they booed her. She called us uneducated (hear that, Pomona College? Apparently one of your pupils is uneducated…) and boring. After a tense stare down and an exchange of angry words, she left our table, only to return to her group and shout, “Even if Romney loses, I’m still rich, and that’s all that matters to me.” This saddened me about humanity in general. I’d like to think that most people care not just for themselves, but also for the wellbeing of others. Also, let me get something straight: I do NOT think all Republicans or Romney supporters act like this drunk woman. I also think there are some crazy, obnoxious Democrats out there too. But I’m just documenting my political interactions for the week, and expressing some of my own opinions. I understand that not everyone holds these same opinions.

I flew home on Sunday, and my sister asked me, with a very sincere and anxious voice, “What do we do if Romney wins?” A silly person would say, “Move to Canada” with absolutely no intention of doing so. I, however, said, “Write to your senators and representatives. Stand up for the things you want to happen, and fight against those you don’t.”

On Monday, I had badminton (yes, best PE class ever), and we always end with a cheer. This time, it was “VOTE.” I went to dinner and talked with friends over what I was going to do on election night, because I needed to study for midterms and might not be able to watch a live stream. A friend gave me sage advice: “You’ll have three more years of midterms. This is the only presidential election you’ll ever experience in college.”

On Tuesday, an anxious buzz permeated the campus. Or maybe that was just me… I asked one of my more politically-savvy friends how he was feeling, and he said, “Confident.” I was a little taken aback by this, and said, “Why? Can you tell me why you’re confident and make me confident? Please?” My roommate said I seemed quite stressed over this, or maybe over a combination of the election and two upcoming midterms in the next two days. As my final class of the day ended at 4, I downloaded the New York Times Election App on my iPhone, and started looking at the notifications and counting electoral votes. My friend literally almost ran into a wall because he was staring at his phone, willing it to load as our wi-fi/3G decided not to work. I tried to focus on studying before dinner, but constantly kept glancing from my desk to the 6 election tabs on my computer screen.

We went to dinner and I tried to take a break from stress, but then headed to be even more engaged with my community at KSPC, our radio station. I’m a DJ there, and we read PSAs on air. That night, we were having a party to re-type edited and revamped PSAs. We turned on NPR, and started typing furiously. At this point, Florida was looking close to being decided, and if Obama got Florida, Obama would win. I didn’t want to miss a thing, and for some reason NPR was playing random bits of music instead of narrating the election play-by-play. But I finished typing PSAs, and nothing monumental had happened. I headed to my friend’s room to follow the election on a large screen hooked up to his computer.

Nothing too exciting seemed to be happening at one point on MSNBC, so we tried FOX News and then the Daily Show. As we were deciding this wasn’t a good way to spend live results time, we switched back to MSNBC in time to see, “BARACK OBAMA: 44TH PRESIDENT OF THE UNITED STATES.” We all collectively sat forward and paid close attention. (I think I might’ve yelled at them a bit for switching the channel.) Iowa and Ohio had gone blue. Facebook exploded. We high-fived. 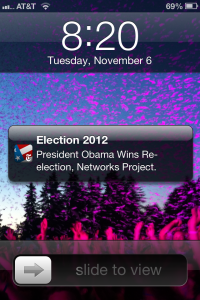 Then my friend and I headed up to the Computer Science lab for a review session. As we were walking across campus, I realized how relieved I felt. I realized that I’d been so worried about how so many things would have gone if Romney had won; but now, I no longer needed to worry about those things. Still, there are numerous things I want to happen in this upcoming presidential term, but there are not several core aspects of a platform I have to worry about. I wanted to celebrate. I wanted to dance around and hug people. Instead, we entered the lab to find people quietly studying. I was a tad taken aback. Didn’t these people know what just happened? I asked if they’d thrown a party about 20 minutes ago, and they responded, “yeah, I mean, we saw he won.” What? So passive? This room gave off the aura that nothing had changed. My friend and I sat down to study, but not before I plugged in my computer and brought my 6 tabs back up, in addition to the live stream on New York Times running on mute. We waited for Romney to show up, then watched him speak. A couple people walked over to take a look, but none stayed. Then, it was going to be Obama’s turn. His headquarters in Chicago cheered and sang, and one of my friends came by and asked if we were just watching the party. YES. As soon as Obama walked on stage to “Signed, Sealed, Delivered” playing in the background, I called out to the lab to let them know they could come over and watch. A couple students scooted over on rolling chairs, and others stood against the wall behind me. One drifted in from the hall to join our group. A girl turned to him with a smile, and said, “That’s our President.” The comments grew more rare until they just stopped altogether and we watched President Barack Obama give his speech. The man is darn eloquent. There was such a feeling of respect and pride in the room around me—the feeling I’d been wanting from my surrounding peers all night. 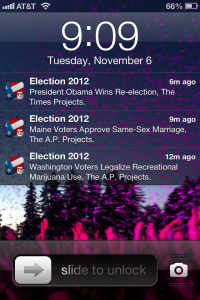 They dispersed, concerned again about the real world and looming midterms. Err, concerned again about the bubble of college and academia, apart from the decisions being made in the real world. I refreshed my multiple Washington state election results pages. Sure, marijuana was officially declared legal, but there was yet to be a decision on gay marriage. News corporations reported it as leading with approval, and showed images of an impromptu party in the streets of Capitol Hill in Seattle. Honestly, I think it’s the night in college I’ve most wished to be in Seattle. The atmosphere would’ve been amazing to experience. It’s not that California didn’t have cool propositions to pay attention to, it’s that Pomona students are from very diverse places around the U.S., so we’re not all watching the same, major ballot initiatives. We can most easily share enthusiasm over the major, presidential race.

As the night grew long, my friend and I decided to depart. I wished my fellow students good luck on the midterm, but stated that it didn’t really matter because of the election outcome. One girl responded, “Yeah, f*** this, Obama won.” My friend and I went to the Coop to celebrate by purchasing and sharing a cookies ‘n’ cream milkshake. I saw two of my friends at different tables, and smiled widely at them while raising my hands above my head in a gesture of shared celebration. They smiled back. One was also indulging in a celebratory milkshake. I went to bed content and relieved.

The next morning, I headed to badminton. We talked about the election for a bit, and then at the end our teacher asked for a cheer. I asked, “Would anyone be super offended if it’s ‘Obama?’” To which my teacher responded, “Well, he is our president.”

That he is, folks. Obama is our president. And regardless of your political affiliation, the leader of our country deserves respect as he faces the long road of tough decisions and difficult tasks in front of him. In the end, we are “One Nation” and we’re incredibly lucky to live in such a place of participation in the political process.

(p.s. Same sex marriage finally OFFICIALLY passed in Washington. Though we still don’t have a decision on governor…)