Let’s talk about all the plays/movies/presentations I’ve watched/attended this week. (Note: sorry if my posts seem very egocentric, but I was told to write about life at Pomona. I feel like I can speak best on MY life at Pomona.) 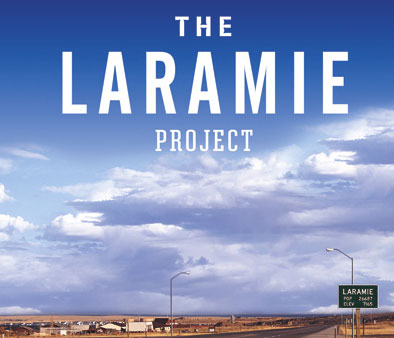 On Sunday night, I took the last possible chance I had to see a production of “The Laramie Project” put on by our student theater group, Bottom Line Theater, or BLT, or the “we are not a sandwich” group. The play is an amalgamation of interviews conducted by and experience had by a theater group in Laramie, Wyoming after the brutal murder of a homosexual male attending the University of Wyoming. This occurred in 1998, but definitely can still make an impact today. For a block of about two and a half hours, eight student actors held the audience spellbound. Everyone was silent throughout—some students seemed afraid to clap (or at least, I felt that way), and there were some sniffles in the second half. My friends and I walked away from that play not being mad at the students who committed the crime, or the way educational or religious institutions dealt with it, but being mad at hate. That play made us frustrated at hate. I think that’s a pretty impressive thing to do, especially when the play focuses on different, more volatile subjects.

However, I didn’t have much time to reflect, because I’d made a movie-watching date with my suitemate. We’re both in Introduction to Environmental Analysis, and needed to watch the documentary, The Cove, in order to complete an assignment due Tuesday. 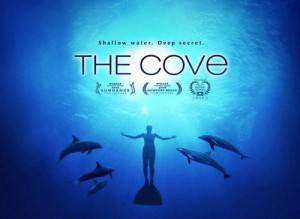 The Cove follows an environmental activist group, Oceanographic Preservation Society (OPS), and their attempts to expose the “largest dolphin slaughter” on earth in the fisheries of Taiji, Japan. Ric O’Barry, once revered as the best and most famous dolphin trainer, is the main force behind this movement, though he spent 10 years of his life building up the multi-million industry of keeping and training dolphins in captivity. This industry fuels the catching of young, female bottle-nosed dolphins and then killing the rest of the catch, inhumanely and away from public view, for meat. Learn more about it here: http://www.takepart.com/cove/takeaction.

I don’t know if feelings over “The Laramie Project” were finally manifesting themselves or if I just really care about dolphins, but The Cove incisively affected me. There’s a point in the movie where OPS has illegally hidden cameras around the kill site (also known as “The Cove,” thus the title of the film), including some underwater, and they play footage from the kill. The underwater camera’s view is shown. It’s just some rocks, maybe a piece of seaweed or two, and then hazy, light blue water. But then this water turns a shade of light pink. And then deep, deep red. It made me feel so sick. I curled into my suitemate’s side and held his hand. But I kept watching. I just couldn’t believe that something so horrible could happen, people could make a documentary about it, but then (and here’s the kicker) it’s still happening. As soon as the documentary finished and informed me that this slaughter still happens, and then showed a number for me to text, I immediately pulled out my phone and did it. I didn’t even care if it automatically donated some amount of money. I just wanted to help, then and there. When it sent back a link to sign an online petition, you can bet I went right back to my room and did so. And then spammed or rather, informed, a handful of my more concerned facebook friends with the link and a plea for them to help.

As soon as the documentary finished, I ran over to some first-years who were studying in the lounge. I knew one of them, so thought I could emotionally attack them and demand they sign the petition immediately. I’m pretty sure the one I didn’t know thought I was crazy, but I got his name anyway and told him I would facebook him and send him the link. I’m pretty sure they laughed at/made fun of me as we left the lounge. I was just so distraught. And I wanted to come back into my room and just hug my roommate. But I returned to find her and two of our friends on our couch/my bed, just joking and conversing lightly. And here I come, making weird laugh/cry-ing noises (though I wasn’t actually crying). So, my roommate got really concerned and asked, “What’s wrong??” As I buried myself to hug her. Somehow it came out that it was The Cove, and she responding in a somewhat of a, “oh, it’s just that documentary” way. Nothing serious. My friends went back to talking, unconcerned. Because I wasn’t having a real crisis. I was fine. I was just being overdramatic about something. And felt like no one was taking me seriously.

The next day, I claimed to hate the world. This probably doesn’t help people to take me seriously, considering everyone’s reaction was, “no, you don’t.” And they were right. I didn’t/don’t hate the world. But it was the best way I could vocalize my feelings at the time. Because all day, I had been thinking about The Cove, and then “The Laramie Project.” The brutal murder of that young man happened in 1998, but I feel like the attitudes that contributed to his murder and were confronted after his death still exist today. There are people out there who think that, based on sexual orientation, other people are less acceptable, less human, and have less value. Does no one else see how ridiculous this is? (Ok, I know there a lot of people who do. And I thank them.) I have friends at private religious universities, and they don’t allow any sort of Gay-Straight Alliance groups on campus. Apparently, the students practically unanimously agree that one should exist, but the administration vetoes it every year. Because it’s symbolic. Because if such universities approve of such a thing as a “Gay-Straight Alliance,” it goes against religious values. Ok, I understand private institutions can do (practically) whatever they want. But having a group like this for gay students does not automatically mean you support same-sex marriage. It just means that you recognize that every human being is a person who deserves respect and recognition and the freedom of speech and assembly. Isn’t that like, I don’t know, the first amendment?

(Side note: I’m being pretty emotional about this, and know that I’m not the best debater. These are just my opinions. Feel free to respond. Hopefully you can make me hate the world less?)

Hopefully you can start to see why I was getting a little frustrated?

All I kept thinking on Monday, throughout my classes, was that if I watched more documentaries, I would probably drop out of school and become an activist. I’m only half-joking. Because, I really haven’t seen any of the famous documentaries—like, nothing by Michael Moore, not even An Inconvenient Truth. And I’m sitting here in classes, in my bubble, not doing anything to help anyone else on earth. I just felt utterly selfish. There are lots of smart and talented people at Pomona, and the 5Cs in general. Why are we not joining causes and putting this to work for the greater good? In The Cove, their team of investigators and illegal-camera-placing-experts consisted of such people as “an adrenaline junkie,” two free-diving champions, a rock concert organizer, a DNA identification specialist, and a member of Industrial Light and Magic. These are random, real-world skills coming together to make a difference. How is my 4-year, really freaking expensive education at comfortable Pomona College going to help me make a difference at that level?

I mean, you can argue that I can do these things after I graduate. But why not now? Because I’m only 19 and don’t know anything of the world? Because I’ve been surrounded by privilege my entire life and can’t understand real hardship? Does that mean I’m not allowed to try?

I was ranting to my friend about this when a guy I don’t really know came and sat down with us. I glanced at him, and then continued on my rant just as before. He’d seen The Cove, and said he didn’t become nearly as motivated or bothered by it as I. I asked him, “why?” forcing him into even deeper reasons. Eventually, he responded along the lines of, because I’m afraid if I involve myself in these larger, real-world problems, the pursuits and problems of my day-to-day life will be insignificant.

I really appreciated his honesty. And I think that might be a reason, maybe unrecognized, that a lot of people choose to be reserved about such issues.

After my radio show (It’s called “The Pursuit of Happiness” and is on Mondays from 2-4 pm. You can listen to it at kspc.org.), I felt a little bit better. I realized that, in my own way, if I reach out to people and affect them for the better in small ways, my time is not wasted. And I strive to do that in my daily life. So maybe Pomona College isn’t such a waste after all, as long as you choose to make a difference.

(Side note: Throughout the week, I attended an extremely interesting Linguistics lecture by a USC professor, and a Computer Science Colloquium featuring a computational linguist. Considering I recently decided I want to double major in Linguistics and Computer Science, these were pretty exciting for me. But that’s another blog post.) 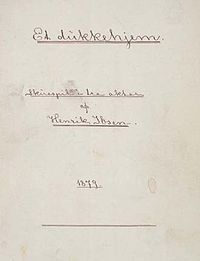 Yesterday, I attended the opening night of Pomona College’s production of “A Doll House” by Henrik Ibsen. (Note: I thought it was “A Doll’s House,” but different people have different translations from the original Norwegian for different reasons.) The play is about a woman seen as silly and petty and frivolous by practically everyone. No one takes her seriously, or think she could have any understanding of difficulty and hardship, even though she has indeed involved herself in something terrible, but tries to take it on herself and protect others. I feel like this character, Nora Helmer, a little bit. I’m often bubbly, boisterous, silly, ridiculous, joyful, and enthusiastic. When I’m sad or angry or frustrated, it’s weird. My default emotion is happy. Or at least that’s what most people around me think. I’m not saying I’m hiding a deep-seated depression and you all need to be worried about me. I’m just saying that maybe I am this way all the time because I realize people don’t have the most accepting reactions when I admit other emotions. I mean, it’s logical that others prefer to be around happy people. Thing is, having a bright smile and a loud laugh does not necessarily mean I’m incapable of having deep, brooding, and conflicted thoughts. It doesn’t stop me from recognizing pain, feeling it myself, and wanting to make a difference.