I submitted my final assignment of CS52 on Tuesday. It was an extraordinarily weird feeling. All those hours in the lab, all those long nights, all those dizzingly intelligent people… And now it’s over. The first CS class I took at Pomona. I absolutely loved it. I definitely think it impacted my recent decision to be a Computer Science and Linguistics double major. Let’s go back to the beginning, and reflect upon all the ridiculousness that is Computer Science class, Computer Science kids, and just plain old Computer Science.

Professor Everett Bull. Looks slightly like a tortoise. Is an adorable man. Loves computer science. Is amused by my volume and excitement.  Always starts class with “The important announcement at the beginning of class today is…” Once, when he was feeling tricky, this announcement was that “there is no important announcement at the beginning of class.” I chuckled. I feel like I’m one of the only ones who does. But then again, I practically laugh at everything.

Upon having whiteboard writing troubles, he commented, “I forgot to bring pens to class today, so I stole 2 of them from the classroom across the hall. Excuse me, borrowed them. I’ll bring them back. Because they don’t work.”

In explaining how we were to write functions that solved logic problems, he gave the example of “Bob is twice as old as Suzy, and someone else is 3 years younger than Bob. … So how old was George Washington where he was born?”

Once, a student raised his hand slightly, and then Professor Bull asked, “Question?” The student responded, “Oh, I thought about it. It’s fine.” Bull—“Dangerous thing to do.”

We were drawing diagrams with nodes and arrows to represent a Deterministic Finite Automaton, and he stated, “Back to square one. Or, back to circle one.”

And after every one of these small jokes, this tiny smile flits across his lips and he has such a joyous gleam in his eyes. The man has a jacket with LEATHER ELBOW PADS. And not in an ironic, young, hipster fashionable sense. How could you NOT like him? (Answer: you can’t.) Also, I’m pretty sure he’s bemused by me. And my friend Nidhi. We were talking before class started, and hadn’t noticed that everyone was quiet. We looked up to find him just looking at us with raised eyebrows. Nidhi apologized, and he said he’d been somewhat interested in what we were talking about and if/when we were going to become aware of our surroundings and stop. Also, my friend Jeremy went into his office to ask a question, just as I figured out the answer, so I ran out of lab and just charged into the lab. Kind of like a tornado. Another time, Nidhi and I were both in his office asking questions, and it just clicked for me. I jumped up and down a little bit. For some reason, I get really excited about Computer Science. Maybe that’s why it’s (one of) my major(s).

Computer Science kids. (Yeah, some of them might be offended by my calling them “kids,” but I call everyone a “kid.” Even though, chances are, I’m younger than you.) Are a little nerdy, or a lot. It depends. Spend a lot of time typing code, and probably not as much time as they should thinking about it. Foster a crazy collaborative environment in lab. Are probably a little annoyed by how loud I am in lab. (Some might say I could’ve left off “little” and “in lab.”)

After I finished our first assignment, which I honestly cannot describe to you, I was giddy with excitement (and probably sleep deprivation), and hula-hooped with my friend Evan in the hallway next to lab. (Oh yeah, the CS lab has mancala and chess and hula-hoops and a GIANT bean bag.) I then looked at my phone. Perfect timing. In my exuberant state, I shouted, “MIDNIGHT SKYSPACE” and charged down the stairs and outside to go see the changing lights on the art installation. I received some incredibly dirty (and probably earned) looks from students studying in the building.

In our second assignment, we all had to revert to elementary school in order to remember the fundamentals of multiplication and addition to write programs that did just that. It was sadly harder than you’d think for most of us.

Sometimes we come up with really creative analogies to explain concepts to one another. In reference to stack frames and only being able to see the one “on top,” I drew a picture of an iceberg with most of it underwater. The current stack frame I considered the tip, above water and visible, but a very small portion of the entity. Nidhi thought it looked like a shark. She made it so: 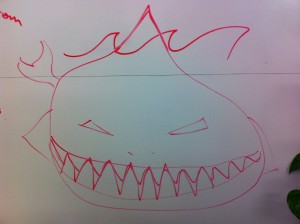 Oh! This reminds me of the collaborative nature of the lab. It’s absolutely beautiful. I think I feel most confident in the future of the world when I see people working together. I think there might be no better place for this on Pomona’s campus then in the CS lab. You just hear someone talking about something you’re also thinking about, and go over and bounce ideas off them and puzzle through it. Most of the time, you work with someone for 20 minutes without knowing that person’s name. I’m normally the one who then introduces myself. (I think some of them would just not introduce themselves. You know, some stereotype about CS kids and social awkwardness…) Actually, in finishing this last assignment, I asked to talk to someone I’d never met before about the problem. After we did so, I introduced myself. He laughed a little, and said, “little late in the semester, isn’t it?” False. Never too late. I love meeting people. I care about knowing their names. (Doesn’t mean I’ll always remember them correctly… but I try!)

CS even helped me expand my repertoire of communication. People think you just lock yourself in lab, but that’s so not true. Sometimes you call your friends not in lab for help at 3 a.m. Sometimes you try and text through a problem. It’s really difficuly without whiteboards. Thus, I used my iPhone camera for the first time to share an explanation. Check it: 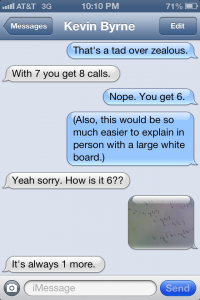 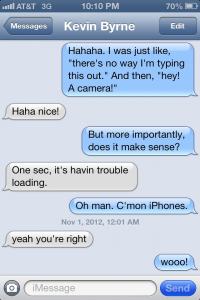 Oh yeah, another reason I love CS: The walls are whiteboards. I absolutely adore writing on them. It gives you a sense of empowerment. I feel like I could work through any problem on those boards. Then I can just erase all the scratch work and mistakes along the way, and have a beautiful clean solution.

Evan counts on his fingers in binary. Evan also tried to tap rhythms during a CS Colloquim—3 beats per measure on his left hand, 4 beats on his right. Apparently, it’s difficult. Evan wrote the title of this post. The kid’s a CS and Math double major. Quote: *arms spread wide to the starry night sky. “The world is a big puzzle just waiting to be solved!”

Tim can tell which direction the train is travelling by the sound of the whistle.

Brady is the only kid from Harvey Mudd. Apparently, they have really expensive coy fish in one of their fountains.

For one assignment, we had to encrypt a message, and then decrypt another from one of our classmates. I was curious about what people encrypted (searching for those deep, dark secrets or professions of love, OBVIOUSLY), and so decrypted all of them. I was actually disappointed in the lack of creativity. We need to work on that. Here were some of my favorites:

Quotes from movies and songs were popular:

“If there is anything that this horrible tragedy can teach us, it’s that a male model’s life is a precious, precious commodity. Just because we have chiseled abs and stunning features, it doesn’t mean that we too can’t not die in a freak gasoline fight accident.”

“My favorite Princess Bride Quotes are ‘Hello. My Name is Inigo Montoya. You killed my father. Prepare to die!’ and ‘No more Rhymes, I mean it! Anybody want a peanut?’ ”

“Your mother was a hamster and your father smelt of elderberries.”

“Where is the love?”

“Watch things on VCRs with me and talk about big love.”

And then the clever:

And finally the desperate:

The last assignment was due at 7 p.m. on Wednesday. Even though I was done, I was in lab with Nidhi. I helped explain topics to people. I love the atmosphere. Even when people are playing an iPhone game called “Letterpress” and just calling each other out. The game’s like scramble, and you have to use tiles to make words. A snippet of the conversation:

We’re so silly and fun, but somehow (miraculously) we get work done. I love working through things, especially with other people. I guess that’s why I’m going to mentor this class next semester. I just love it too much. I can’t let the experience go quite yet.