I’ve written about Presentations and Politics at Pomona, now it’s time for a little something about Performances.

I like performances. They’re different from presentations in that I find them to be more artful, while still making an intellectually stimulating point. Also, if they’re put on by students, it’s a chance for me to be humbled and impressed by the skills of my peers.

This all began last Friday night, when I saw Queer Burlesque on Pitzer’s campus. It was advertised as “A radical performance that questions societal norms with regards to gender, sexuality, race, sex, ability, class and everything in between. It is moving, funny, potentially upsetting, will make you laugh, question your values, and think. Come for a sexy, funny, questioning, amazing time!” And this years theme was dreams. I really had no idea what to expect. I went to support a couple of my friends in performing. Unfortunately for the multimedia aspect of this blog post, we weren’t allowed to take pictures. I also didn’t find a lot of the nudity in that show particularly shocking, because hey, I’m a female-bodied individual, that looks pretty familiar. I think the most moving part was a poem recited by Mason Weiss PZ ’15 that he wrote when he came out as transgender. Apparently, this part of the performance received a standing ovation both nights of Queer Burlesque. My friends were exceedingly adorable, as always, in a more classic burlesque dance, in which my favorite part was when the one guy walked acorss the stage and each girl had a sound byte of something to say to him. My friend crossed her hands over the bar, looked up at him, and mouthed (with the sound byte), “You’re so taaaawl” in the most hilarious stereotypical New York accent. I cracked up. She would never actually speak that way. Another interesting occurrence, that probably made me laugh the most, was the “Orgasm Orchestra” the audience participated in. They divided us into 4 sections, and gave us each noises. My friend and I had moaning, but pretty much just deteriorated into laughter once they started pointing at the different sections in rapid succession. Overall, Queer Burlesque was quite the experience, eye-opening in some ways, and… well, I’m still not quite sure how it affected me in total.

On Sunday, I had the pleasure of seeing Eddie Izzard perform at Big Bridges at Pomona. Things I knew about Eddie Izzard: 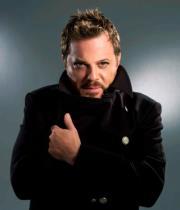 2. He’s a transvestite (and makes a lot of jokes/references to it).

3. He doesn’t tell jokes, he just tells stories (and they happen to be hilarious).

4. He performs sets in fluent French (normally when in France, but he did a bit for us here. I surprised myself in understanding it very well, as I think a lot of other audience members did, as heard in the pockets of laughter in response to his French).

5. He’s running for Mayor of London in the future.

6. Apparently, there’s such a position as Lord Mayor of London. (Eddie Izzard held a Q&A session afterward, and this small, adorable man with a British accent asked him about politics, and said indignantly, “You ought to be Lord Mayor or nothing!”)

Monday involved something I like to think of as a performance. I participated in a march across the 5Cs to “Divest the West.”

“Did you know that the 5C’s have a collective endowment of $3 billion? Would you like to see those funds invested in sustainable energy instead of fossil fuels?

This movement is helped in motivation by environmentalist Bill McKibben, and his new “Do the Math” tour. His comment on divestment: “If university presidents are serious about working for the future of their students, they shouldn’t be investing in companies out to ruin that future. It just doesn’t make sense.” 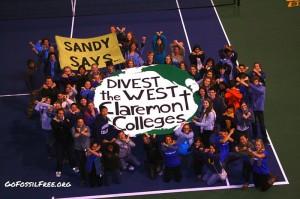 Here’s the Divestment Movement: http://gofossilfree.org, with a picture of 5C kids as the banner! Apparently, we’ve been written about in Rolling Stone. Also, in less than a month, movements of this type sprung up at over 100 colleges. People are ready to fight to make a difference. I find that incredibly inspiring. I joined my fellow students at the 5Cs to march across campuses and deliver a letter of our demands to

2. Remove all investments from fossil fuel companies in the next 5 years. 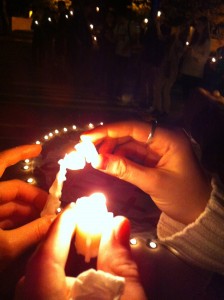 This was accompanied by cheers (one of the best? “Hey hey, ho ho, fossil fuels have got to go!”), confused looks of passerby and students from their dorm rooms, and a candlelit picture at the end. We all had lit candles and stood in an X in Bixby Plaza in front of Frary, as a photographer at the top of the bell tower took a picture of us. I have yet to see it. I hope it’s awesome. I felt such a great vibe from those people. I felt like I was part of something bigger. It’s the first time I’ve ever participated in anything like that, and I’m definitely interested in doing it again. 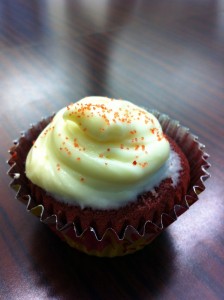 On Tuesday, I got to one again take part in enjoying the skills of my fellow students. I ate one of the best homemade red velvet cupcakes of my life. I was impressed, satisfied, and motivated to keep working on my Computer Science program.

On Wednesday, I experienced an interesting, unanticipated performance. I was walking back to my room and heard a strange noise coming from it. My first thought—“Why is there a drum circle in my room?” because those DO happen on campus. But then, as I approached the patio door, I saw figures moving enthusiastically. Two of my friends were in my room tap dancing, while a couple others sat and did homework or watched. But it wasn’t really a performance, the tap dancers were dancing for themselves, and each other, because they absolutely love it. I’d never seen my friends tap before (even though they’re both in tap club) and was enthralled. At one point, their performance drew 7 audience members. Some others who live in my hall actually came to the door in a confused state over what this noise was. One of them commented, “This makes so much sense now! From the hall it just sounded like people slapping their bellies over and over again.” I think my favorite part was when someone asked if tap was dance or music. One of the tappers, Lucie, responded, “oh my gosh, that’s the best question! It’s BOTH.” Both my friends love tap. And I love watching them become so happy by doing something they love. I hope everyone has something like that.

Last night, I attended another dance performance, but this one was actually advertised and meant to be attended by a large audience in Pomona’s Pendleton dance studio. My main motivation? My roommate and friend were both in it, and I love them. Also, I knew a few other people performing.

All the dances were choreographed and performed by students, which was definitely impressive and humbling. My roommate didn’t actually know I’d gone (I’d been planning on a different night), and I surprised her with the program and hearts around her name when she came back. She got super excited, and asked me to tell her what I thought about all the pieces. We sat down on our couch and I just started explaining my feelings about them, even though I don’t dance and could miss a lot of the artistic points. It was just really nice to discuss, because I did get a lot of different messages and feelings from the pieces.

On a more random note, even the dining hall workers were, in their own way, performing this week. I went up to get a certain dish that included the possibility of marinated sausage, and when asked if I wanted everything, I said, “No meat, please.” A worker then joked with me, “Ahhh, so you’re one of those people they call a vegetarian.” Yup! Everybody’s a comedian. 🙂 The man who works at the grill also started banging out a rhythm just for fun, and his smile and enthusiasm was so contagious.

My final experience with performance this week did not actually involve people. I went to Skyspace, the fountain and art installation on Pomana’s campus, with a friend and we sat and talked for quite a while into the night. Skyspace has a light show on the “ceiling” above it on the hour every hour at night, each one called a “chime.” We got there around 10:30 p.m. We saw 3 chimes. You do the math. 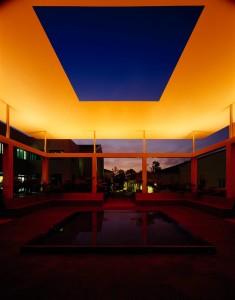 As I walked quickly back across the chilly campus to my dorm room, I felt like maybe even nature was performing. I guess maybe it’s always performing, but we just don’t pay attention to it. I heard multiple owls hooting as I crossed Marston Quad; I watched my breath fog in the cold, night air; I looked up at the stars and the moon. I legitimately laughed out loud at the moon. It looked like a smile, gleaming a bit around the edges. I immediately thought of the Cheshire Cat. How fitting for my interesting and quirky week.