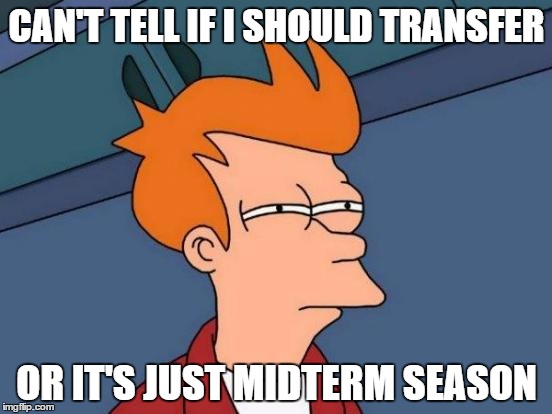 The first thing no one tells you when you try to transfer schools: You’ll just know when you have to leave.

My name is David Ahia and I’m the Voices blog’s resident transfer student. I have the unique perspective of having gone to a large private university prior to attending Pomona, so I hope I can help you decide what works best: big or small, research or liberal arts. And if you’re thinking about transferring, for whatever reason, from whatever college, this post goes out to you.

The question I always get asked when I say I transferred (after receiving the almost requisite praise for getting into Pomona as a transfer student) is this: when, or why, did you decide to transfer?

Luckily for those asking, it’s a funny story. I first decided to transfer after attending a screenwriting awards ceremony in the spring of my sophomore year. I was in film school, and one of my professors invited us to a small gala celebrating the best in that year’s films. My classmates and I sat through the affair, each of them glitter-eyed, waiting for the highlight of the ceremony, a lifetime achievement award for two alumni from our program.

For those who have never attended film school: first, congratulations, you aren’t missing much. If you have even the vaguest interest in Pomona, that means you have some appreciation of the liberal arts, of embracing the expansive and humanistic world around you, and that inkling of interest bars you from the often mechanistic “professional training” that film school provides. But to understand this event, you should know that people in film school want to be legitimized. There exists an odd paradox in film school: everyone enters because they want a specific job and, due to the statistics of the industry, there exists a high chance they will fail. This stands in opposition to the liberal arts college experience, where those majoring in philosophy most likely aren’t doing so for a prospective job, but for some inherent joy they find in reading Hegel. A philosophy major does not need proof that they will one day be a professor, but a screenwriting major needs constant legitimization that their decision will lead to a lucrative career. Film majors are all jitters, wondering if they should have picked a different major and then gone to grad school for an MFA. And here stood two undergraduate screenwriting majors, holding aloft their lifetime achievement awards, living proof that yes, an undergrad can succeed.

By this point in my college career I was whispering to Siri every night: “Is it a good idea to transfer colleges?” Any anxiety prone kid with a phone knows what it’s like to stress-Google, to ask the internet all of the questions you’re too afraid of asking anyone else. After my first semester of film school, I lived in constant agony. Why the hell was I here? Should I transfer? Would I someday unlearn my sadness and become a great filmmaker? Did I even want that anymore? Had I ever wanted that?

There exists no guide on the internet that tells you when to transfer. This is because no guide can. You have to answer this question on your own, and that’s more difficult than it seems, because almost everyone who enters college entertains the idea of transferring at some point. Because after all, the grass seems always greener, and maybe some other school would make you happier.

But after the ceremony, we got to meet these feted screenwriters. The two of them, visually drunk (as most Hollywooders are after an awards show), stumbled up to our group of undergraduates and said, “Fuck the grad students, they don’t know what they really want. You undergrads knew you wanted film from the start. You guys are better than any grad students.”

Those words, the attempt at encouragement, the affirmation that spending one’s undergrad career hunched over Final Draft was the best thing to do, stuck with me in the following days. I had already begun my CommonApp transfer essay–only as a joke, mind you. But after hearing that “you undergrads knew you wanted film from the start,” something became clear to me: I didn’t know if I wanted film, and I had never known, and the simple fact that I had started my application, even as a joke, affirmed to me that I did not belong at film school at all.

Instead, what I’d wanted all along had been the liberal arts, the humanities. Academy-Award Winner Jim Taylor (Pomona alum ’84) had similarly foregone film school in order to pursue the liberal arts, believing it better to learn something about this world before trying to make a film about it. And that night, I realized that I felt this way as well: I wanted to know the world, not to film it.

No one ever thinks it will happen to them. Most people consider transferring for a moment, normally around midterm season, and then let the idea go. But this was the moment when I just knew that I had to transfer, that a film school, no matter how prestigious, was not right for me.