This week I sat down with Jack Buyske, a rising senior at Pomona, to talk about all manner of topics. A Public Policy Analysis major, Jack is on track to head off to medical school after he graduates. Our conversation ranged from the fierceness of the Sagehen mascot to his experience in the college process.

Jack, first welcome, but just really quickly where are you coming from?

I grew up in Princeton, New Jersey.

So you’ve been in Los Angeles for about 3 years?

We’re both Summer Admissions Fellows, but you’ve had a bit more involvement with the office than some of us. Can you talk a bit about what you’ve done with Admissions in the past?

I started interacting with Admissions during the spring of my first year here as a student tour guide, so way back in the day.

When I was a young child, yes, and I’ve been a tour guide since then, except for the spring of junior year when I was abroad. I’m an Admissions Fellow this summer, and I’ll be a head tour guide in the fall. In that time, I’ve also helped with Admitted Students days and all kinds of stuff like that.

You’re also best friends with Juanita who sits at the front desk.

Juanita’s amazing—if only I could be her best friend. 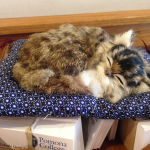 Jack, how do you feel about the fact that Juanita keeps a very realistic looking cat on her desk.

I do not like the realistic looking cat, love Juanita, the best colleague I could hope for, but not a fan of the cat. It disturbs me, I think it disturbs the guests, I thought it was real for a long time, so no.

Anyways, Jack, you mentioned that you studied abroad the fall of your junior year.

Yeah, fall of junior year. I studied abroad in Durban, South Africa, which is probably the biggest city in South Africa that you have not heard of. It’s on the east coast and sits on the Indian Ocean.

Highlights, lowlights from that?

Highlight. I really did like the program. It was a public health-based program, and South Africa is a really interesting study in public health because of various social inequalities and the HIV/AIDS epidemic. I also really enjoyed staying with a host family and staying in a township outside of Durban. Lowlights. While it was interesting to study public health, it was also depressing at times because the population is generally very poor and sick.

So let’s switch gears and just talk a little about your time here at Pomona, and some other stuff. What’s your favorite pizza topping, Jack?

Well I’m a vegetarian, so a lot of the standard toppings are off-limits, but I do like pizza with arugula on it.

Is there any place in either the [Claremont] Village or the surrounding area that has like a vaunted arugula pizza?

I didn’t know New Jersey was filled with pizza snobs, but I knew New York was.

Hold on, so you called it, as you say, “Trenton pizza culture”? Like Trenton [the state capital], New Jersey.

Has a pizza culture, yes.

I think it’s an important part of the city.

A part of the social fabric if you will.

Yes, so I am a purist, so I honestly don’t eat that much pizza out in California.

What’s your favorite part of being a Summer Fellow in the Admissions office?

The relationships with everyone in the office! The admissions officers are so friendly and welcoming, it makes for a fun summer.

What’s your favorite place in the Village?

I Like Pie and the square next to Yogurtland. I don’t really know what it’s called. 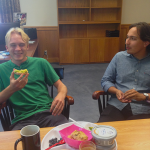 Yeah, me either, that’s a good question. What’s your favorite dining hall here on campus?

(Editor’s Note: The author of this article was particularly hungry at the time of interview)

So like an “ambience and décor” type of deal?

What’s your favorite place on the 5C’s to spend time?

To hang out, I would say Walker Beach. Play on the basketball courts and chill on the grass. To study? Depends on my mood. 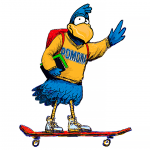 What are your thoughts on the Sagehen mascot? Thumbs up or down on Cecil?

It’s cute, but when we play CMS [inter-consortium rival Claremont-Mudd-Scripps] I wish we had something a little more fierce. I generally think the sports teams do pretty well with it, like the football team has a cool Cecil. I like what the tennis team does with the “Protect the Coop” themes.

Really? See that [Protect the Coop] just makes me think about the Coop Fountain and getting like chicken fingers.

[Editor’s Note: The Coop Fountain is one of the non-dining-hall eating establishments on campus. Again, note the growing hunger of the interviewer.]

Wow, that’s actually not that bad, can you propose that to the Coop Fountain staff?

Wow. OK, we’re going down some rabbit holes. Let’s get back on track. What are your thoughts on the PE class “Playground Games”?

I’ve never had room for it in my schedule, but it seems really fun! They always seem like they’re having a fun time on Marston Quad.

What did you actually take for your PE class?

What clubs or activities are you involved in here on campus? Like what would you say you do, besides school and soccer with Coach Swartz?

I’m a head tour guide, I worked in [Professor of Chemistry] Johal’s lab, I will have an internship at East Valley Community Health Center, and I worked with STEP [Saturday Tongan Education Program] this last year.

Do you have a favorite class in your past three years? Or maybe one you’re looking forward to?

So, when I say, Organic Chemistry, people freak out at me, so I won’t say that. I will say Political Philosophy with [Associate Professor of Philosophy] Michael Green. He’s a fantastic professor. He’s really good at leading discussion, and I had never taken a philosophy class before. I had never read Plato or Hobbes, and that was just interesting to me. It’s still one of the classes that most impacts how I think, and how I form arguments…

[Editor’s Note: Here is when the clock struck noon, and we tore out in search of lunch.]