Just about two months ago, I left my urban home of New Orleans for the suburban community of Claremont. Upon arrival at Pomona College, I was shocked to discover that students had a drastically different mindset than where I came from. How was this possible? Is California really as liberal and progressive as the news told me? 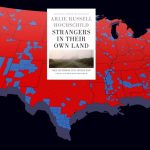 Ironically enough, just as the first-year summer reading book (Strangers in Their Own Land by Arlie Russell Hochschild) suggested, Fox News is the most popular news source in Louisiana. Thus, no one at home really understood what it meant to “progress.”

When I arrived on campus, one of my first experiences was Orientation Adventure, and my adventure was centered on Community Engagement. The adventure is just four-days, but the experience and relationships that we developed I feel will last over a lifetime. The goal of the Community Engagement adventure is to introduce students to surrounding service opportunities. One of the most significant places we went was the 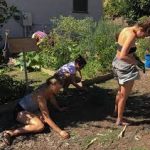 Tongva Living History Garden, which is a place to learn more about Native history and practices near Pomona’s campus. Also, we cleaned the river in the Angeles National Forest. The places we visited forced us to address important social and environmental issues.

The outing that most intrigued me, though, was going to Homeboy Industries. This nonprofit includes a restaurant and bakery, as well as many other business opportunities—but that’s not all. This business is unique because it is run by and employs ex-prisoners. This may shock some, but most prison inmates we met were nonviolent drug offenders who committed these crimes because that’s how they fed their families. 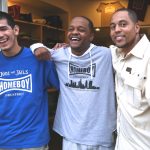 Visiting Homeboy Industries humbled me and made me realize that everything you hear and see on the news isn’t completely true. On TV, you hear about war and poverty, but you don’t necessarily picture the people who are really being hurt and affected. That’s until you step into their shoes.

Community Engagement is the Orientation Adventures that separates Pomona from the rest. It exposed me to an organization whose goal is to have a bigger impact than education; they attempt to train youth to be good citizens. Imagine a world where the lowest-income communities could develop into vibrant cities like Los Angeles, Boston, and many more. A world where we won’t have to worry about crime, drugs, and all these unnecessary stresses. Instead of the common perception of government aid as “handouts,” I wish that people could realize that employment and wages provided by groups such as Homeboy Industries can help people escape from the cycle of poverty.