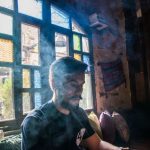 In Arabic, the name of this city is one character different than the word for safe. This coincidence holds credence in that the people of Amman are overwhelmingly benevolent. Crime is an afterthought, as the government and population take great pride in the public security of a country geographically surrounded by conflict. While this has troublesome consequences in xenophobia of refugees, one can assuredly feel safe wandering the streets … if you’re a man.

Coming to Amman, I knew that gender dynamics would be more pronounced in a Muslim country but was surprised by the extent of the divide. Without delving into the more egregious manifestations, I am still perplexed by one particular cultural peculiarity: women do not sit in the front of taxis.

Amman is easily traversed by a long walk, but taxis are the primary mode of transportation. They are everywhere, not unlike in a large American city, but hailing, directing, and paying for a taxi are made easier by traveling with a man who sits in the front passenger seat. Obviously, I have never traveled in a group of all women, but the stories my female friends have told me of marriage proposals, price gouging, and plain old insults scare and perplex me.

Even something as simple as transportation is blanketed with sexism. Perhaps this is not so different than many American institutions, but it parallels a deeper problem in Jordan that extends into the household, economy, and broader public sphere. For example, the more educated a woman is, the more likely she is to be a housewife. I will never fully understand what it is like to be discriminated against on the basis of gender, but being in Jordan has given me a better appreciation of my own privileges and America’s sizable (but incomplete) strides towards equality.