Pomona loves to tell prospective students that it offers the best of both worlds: a tight-knit, small-campus liberal arts college, just a 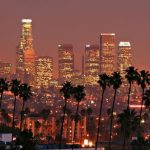 stone’s through from one of the US’s biggest metropolitan areas. Los Angeles is a sprawl of a city that includes beaches, high-rises, famous media sites, towering mountains, and an arid desert climate. From tacos to the ocean to warm weather year-round, it has a lot to offer.

But Pomona students see LA’s more undesirable sides, too. Temperatures surge into the 100s in the summer. The smog, though better than it was 30 years ago, is present, sad, and, for lack of a better word, nasty. The freeways are sprawling, never-ending, and filled with notoriously speedy drivers who don’t check their blind spots before swerving across 4 lanes of traffic.

The traffic. Oh, the traffic. The source of much discussion and aghast jaw-drops, especially from us Midwesterners who think that a “commute” is 25 minutes and that “rush hour” is predictable. Though LA has some public transportation, four wheels remain the fastest way to get around. 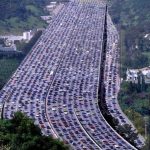 And “fast” is a loose term here. Commutes of 2 hours one way are routine. Once, coming home from a night out in Downtown Los Angeles (known as DTLA) at 1:30 a.m., we hit 45 minutes of unexpected traffic on the 10 freeway. It can take anywhere from 1 to 2 hours to drive 45 miles to a beach from Pomona. Let that sink in. There could potentially be an hour of unseen traffic that you’ll sit through. Even though the freeways are, like, a mile wide.

My first year at Pomona, I had an afternoon class that was spontaneously canceled, so at 8 a.m. I set out for the beach with a friend. I figured 1-2 hours to get there and 1-2 hours to get back for my 4:15 rehearsal. And I budgeted 2 hours 30 minutes for the return trip, just in case, because I knew the traffic was bad. Sure enough, we arrived at 10 a.m., very routine. But, on the return trip, though we left at 1:45 p.m.––budgeting double the time it took me to get to the beach––I arrived 20 minutes late for rehearsal.

The director of the rehearsal impatiently told me that Thursday afternoons are one of the worst times to drive east on the 10. How the heck am I supposed to know that? I wondered. I was bewildered.

But I was also in awe, because it seemed like Angelenos, such as my director, had a special subterranean radar for traffic patterns, an ability that Midwestern me sorely lacked. It is precisely this understanding of the craziness/madness/hugeness of Los Angeles that fascinates me.

When you arrive here in the Inland Empire (the IE), new Sagehens, forget everything you think you know about traffic patterns. Keep a good audiobook or podcast series loaded on your phone, find great radio stations, and make fabulous mixtape CDs. You’ll need them when the random, frustrating 1:30 p.m. traffic sets in. And stay open to the ongoing mystery that is driving in this massive, incredible city.