My first semester at Pomona was unforgettably fun and eye-opening. While my friends and I made ample use of the seven dining halls, five campuses, sunshine, cafés, and thrift stores in Claremont, we occasionally took the Metrolink train into L.A. in search of places and activities to explore outside the 5C bubble. 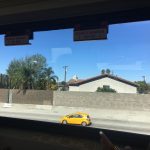 We really made use of the city, a short and smooth hour-long journey from campus, roaming from Santa Monica to Venice, Hollywood to Little Tokyo and the Arts District. The journey mattered just as much as the destination—we’d read books and gaze outside the train window and talk until we realized we were the last ones on the train, before fumbling for our bags and rushing down the stairs to leap out of the train just before the doors slid shut. The Metrolink gave us a lovely sense of independence and freedom, something we as college first-years were automatically drawn to.

In the blink of an eye, the end of the semester, marked by a whole four-week winter break (thanks, Pomona!), was on the horizon. Hong Kong is my home, but my sister recently moved to Boston, and so my parents decided to fly over to the States, where the four of us would meet in wintry Massachusetts, the same state where I had spent the last five years of my life in boarding school. Picturing the month-long vacation ahead, I worried that, after a fun-packed semester, I would get bored on such a long vacation with no fixed schedule.

Now, I don’t know how to drive, nor is the New England winter particularly conducive to time spent outside the house. I pictured myself getting antsy and bored while my sister went to work each day, not knowing how to spend weeks of absolute free time with little to do or see in Boston.

As fall-semester finals approached, my main form of procrastination (as it often is) was to plan out the near future. After a few bouts of fervently messaging friends from high school and clicking through various travel options on Google Maps, I found the remedy for my once-impending boredom: I would visit friends in and around the Boston area—a friend in New York City, and another at college in New Jersey. Even better, my parents planned for the four of us to spend Christmas with my cousins in New Hampshire, followed by a few days’ Buddhist retreat (my mother’s idea) in upstate New York. Suddenly winter break was a month I awaited in eager anticipation, one where I’d spend quality time with family, extended family, and even a string of old friends. 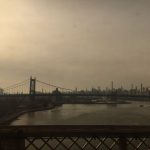 My now-filled schedule involved a lot of travel time alone, something I’ve come to love as a city-dweller and boarding-schooler. To get from Boston to New York City to New Jersey (and all the way back) I’d ride the Amtrak, and bouncing from one coastal Massachusetts town to the next would also require the commuter rail—which for some reason I had neglected to acquaint myself with while in high school.

So, as I boarded my long-awaited flight from LAX to BOS on the same day I had plowed through a Computer Science final, my chest was jittery with excitement. At the same time, my nerves began to encroach; seeing so many people so important to me in such a condensed period of time was daunting, on top of the fact that I hadn’t been on the East Coast (my second home) for a good six months. I get especially sensitive to changes in time, place, and company, and so the next month of vacation was sure to be an emotional fountain for me—a release, sure, but one caused by a lot of internal pressure and worry.

Luckily, I was blessed with the commute. Sometimes I imagine a world in which apparition (ref: Harry Potter) is possible, and distance is rendered obsolete by the instantaneous movement of people from one place to the next, with travel altogether removed from the equation. This vision unsettles me. Throughout winter break, I relied on the inevitable hours of independence and physical idleness that long-distance traveling tended to entail.

Somewhere along one of the many railways of the East Coast, I would plug in my headphones and queue up a series of songs (cumulatively longer than the train ride itself, if I got carried away). I felt comfort having a book and my computer in front of me, my duffel bags above my head, and some new neighborhood, pond, or leafless forest zipping in the opposite direction through the window to my right. I could read and write and snack to my own quiet devices, knowing that the train was carrying me closer to some people whom I dearly loved, whom I’d been thousands of miles away from for too many months.

On my first train ride after New Year’s from Boston’s South Station to New York’s Penn Station, I was warmly reminded of riding the Metrolink from Claremont into L.A.’s Union Station, only this time I was alone and the mountains and palm trees outside my window were replaced by an entirely different scene. Still, the Amtrak offered me the same independence and freedom that the Metrolink had gifted me throughout my fall semester. I was undoubtedly privileged to be able to take such a pleasant form of transportation, to visit my friends, to be alone. I smiled and felt very fortunate. 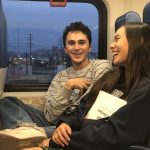 Distance, or rather the transportation that it requires, often brings with it a temporal and monetary price, but I’ve also come to see traveling as a much-needed transition and reflection period between vastly different worlds, between vastly different places and experiences, whether tens of miles or hundreds of miles apart. I am grateful for the commute, especially when it takes place on a quiet train that slinks along the tracks between houses of people I’ve never met and mountains I haven’t scaled, between lanky, sunbathed palm trees or stark, deciduous trees that stand powerfully dormant and yet viscerally enlivened by the bright gray cold.