In a previous blog post, I shared my academic adventure through the six breadth of study area requirements to highlight how easy it is to explore many disciplines for Pomona students. In order to fulfill the foreign language requirement, Pomona generally requires students to either pass the third semester or higher of a language course, earn a 4 or 5 on an AP exam, or earn a 6 or 7 on an IB exam. Students can also fulfill the requirement for certain languages with high grades or scores on an SAT II subject test or an A-level exam. Finally, students with a diploma that shows their primary language of instruction through the eighth grade or above was a language other than English will have fulfilled the foreign language requirement.

Now, I’d like to use my experience as a French-speaker who is planning to major in politics and minor in history to demonstrate how Pomona’s curriculum allows students with multiple passions to still be immersed in a foreign language or even multiple ones.

To start off, Pomona offers rigorous language courses that either build a strong foundation for students who are new to a foreign language or strengthen the basic foundation for students who already speak one. After taking French in high school for four years, I had a relatively strong background in French grammar and was well-versed in writing timed in-class essays. That being said, I always felt nervous about speaking French with native speakers and was not confident in my ability to orally communicate what I could read and write with relative ease. 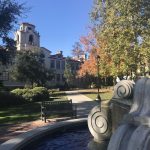 Since I was eager to strengthen my French skills while at Pomona, I took Intermediate French (French 33) during my first semester. This was a great transition class for a student like me because it met four times a week and enabled me to garner a lot more confidence in my speaking abilities. I was fortunate to have such an enthusiastic and engaging professor who taught grammar and vocabulary through films we would watch outside of class. With a variety of quizzes, essays, and grammar homework, as well as fruitful class discussions, I felt a lot more comfortable discussing much more complex topics in French. At the end of the semester, we were given a taste of what Advanced French (French 44) would look like by reading, analyzing, and writing an analytical essay about existentialism in Jean-Paul Sartre’s play Huis Clos.

In French 44, I explored liberty, ecology, and modernity in 19th– and 20th-century texts, artworks, and films from France, Algeria, and Martinique. I enjoyed the exposure to revolutionary authors like Charles Baudelaire, J.-K. Huysmans, Sidonie-Gabrielle Colette, and Aimé Césaire in this class. Seeing how gender, race, and social class impacted individual experiences during an age of modernization was fascinating. As a class, we analyzed the impact of modernity on the environment, while also noting parallels with the treatment of women and people of lower social classes. This class really challenged me to scrutinize these French works as if I was examining them in my first language, English. Ultimately, through class discussions and writing assignments, I came away from this class with a much stronger understanding of how to analyze and compare pieces of literature in French.

To further enrich my understanding of French, I plan to take Intro to Literary Analysis (French 101) or another upper division course in the future. Even with my major and minor classes in politics and history, I will be able to take at least one more French class, if not more, during my time at Pomona.

Beyond language classes, Pomona has the Oldenborg Center for Modern Languages and International Relations, which houses a dining hall, a language dormitory, and an academic administrative office. The unprecedented learning opportunities in the Oldenborg dining hall make it a really special place. On the one hand, students can come for lunch between Monday and Friday, dining at language tables, where only foreign languages are spoken. While Chinese, French, German, Japanese, Russian, and Spanish tables meet daily, there are also tables for Arabic, Armenian, Cantonese, Tagalog, Persian, Taiwanese, Polish, Thai, Swedish, Korean, Hebrew, Amharic, Hindi/Urdu, Indonesian, Vietnamese, Dutch, Haitian Creole, Italian, Swahili, and Turkish sprinkled throughout the week. Attending language tables has enhanced my French speaking abilities, so that I can talk about my day, literature, the news, and what I’m learning in my other courses in a language other than English with fellow students, language partners, language residents, and professors. Whenever I’m unsure of how to say something in French, I am able to learn and improve by asking others at the table for vocabulary suggestions or grammar advice.

On the other hand, Oldenborg invites notable scholars, writers, activists, and professionals to speak about cultural and international topics for the Oldenborg Luncheon Colloquium (OLC) in a separate room in the dining hall. I’ve enjoyed going to OLCs to listen to scholars’ fascinating stories about the world we live in and the cultures that surround us, and I am excited to be serving as a student chair for an OLC in the spring semester.

Furthermore, Oldenborg has housing for over a hundred Pomona students who want to be further immersed in a foreign language experience. There are both friendship suites and designated halls for Pomona’s primary languages, including Chinese, French, German, Japanese, Russian, and Spanish. Each language has one or two lounges for its students to meet, take conversation classes, and enjoy cultural activities with the language resident (usually a graduate student from a foreign country), who lives in the dormitory as well. 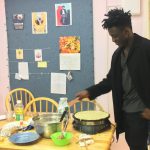 I’ve loved living in the French hall with friends nearby and have come to better understand and truly appreciate French culture by living in Oldenborg. Though I’m not currently enrolled in a language class, living in Oldenborg has been a great way for me to continue practicing my French oral skills with the language resident and other Pomona students who speak the language. Moreover, I’ve enjoyed the fun cultural activities hosted by the language resident, where I’ve been able to enjoy French cuisine, watch French films, see French exhibits, and more.

Since I am technically an international student already, I don’t plan on studying abroad in my junior year. Even so, Pomona offers many exciting study abroad options for French-speakers in Dakar, Senegal and in Yaoundé, Cameroon as well as in Nantes, Paris, and Montpellier in France. Students interested in exploring other study abroad programs can also petition to go on ones affiliated with other colleges.

Overall, it’s clear to me that Pomona has boundless opportunities for developing a global perspective and mastering a foreign language.