I don’t know about you, but, to me, there has always been something about lists that draws me in. “Top ten places to visit,” “best books to read this break,” “47 things to do while at Pomona”— the list goes on. Do I complete these lists? No … not necessarily. I’m also not good at keeping up with the lists that I make. Daily to-do lists? Can’t follow them. List of movies I was going to watch over break? I think I kept up with that one for maybe two days. List of recipes I was going to try while home? More like “let’s see how many days I can eat eggs and toast.” Moral of the story: I can’t keep up with lists that I make, and I can’t say I follow through with lists that I find online. So, I thought, there must be some kind of list that I’m good at completing.

In comes the list of the 10 moments (in no particular order) that highlighted my first year at Pomona — yes, it’s a list of things I’ve already done. I can’t really mess this one up, right?

In all of my 19 years of life, I had never been camping. I’m talking no communication, no showers, sleeping in tents, cooking food for hours over a tiny flame, the whole thing. I do love nature, I just never had the chance back in sandy Charleston, SC. But within my first week at Pomona, I had the opportunity to go up to Big Bear on my Orientation Adventure trip and spend a few days experiencing the outdoors and doing some real camping. The friends that I made during that trip are some of the best people out there, and camping is easily a highlight of my time at Pomona.

Number 9: Attending the FLI-Conference at Stanford

As a First-Generation, Low-Income (FLI) student attending a school surrounded by overachievers and privilege, it can be quite overwhelming at times. When I attended the conference at Stanford, I was surrounded by people who had similar stories to me, and it is such an amazing feeling to know that I was not alone. Because Pomona was able to fund our attendance, I made great new friends, explored the city of San Francisco, and learned how to better navigate life as a FLI student. 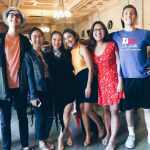 Let me just start out by saying that I have performed on the same stage as Taylor Swift. As a member of the Claremont Colleges Ballroom Dance Company, we perform our annual Spring Concert in Big Bridges Auditorium, one of the finest music halls in Southern California. My first performance with the company had the theme of “Break Up to Make Up,” featuring break-up and love songs from various genres. It is a performance that will be in my heart for ages.

Imagine this: 4 nerds, with languages English, Spanish, French, Portuguese, German, and Japanese spoken among them, and one Scrabble board. A friendly game of multilingual Scrabble was inevitable! Now a classic game between my friends and me, I’ll always remember that late night in Harwood Lounge as we huddled around a table with letters carefully arranged on our board.

Back in Charleston, I had never had the time to check out the theatre scene. I also couldn’t exactly afford expensive shows, and my high school didn’t even have a drama department. But upon coming to Pomona, I was able to finally see what theatre is all about. The first show I attended was Lost and Found, a musical entirely written, directed, and produced by students. It was such an incredible show that I went to every show they had that weekend and have been in love with theatre ever since. 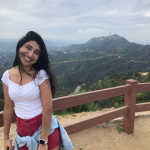 After I found out I’d be living in Los Angeles, all I could really imagine was The Hollywood Sign and the Hollywood Walk of Fame. It most definitely seemed surreal to imagine living nearby. It wasn’t until Spring Break, though, that I finally got around to that side of town. I took pictures in front of Selena Quintanilla’s Hollywood Star, my namesake, before my partner and I tried hiking to the sign. It’s definitely not as easy as it seems, but I’d say we got pretty close, don’t you think?

For those of you who may not know, Charleston is a beach city. You can’t go far without seeing some body of water, so coming out to Claremont, which is surrounded by mountains and city, was definitely a change. But when my friends and I finally made it out to Dana Point, a beautiful Orange County beach with fields of green grass to play volleyball in, it instantly became my favorite beach … on the west coast. The water was freezing, as in my feet actually felt like popsicles, but the memories made and the laughs that I had are unlike anything else.

Nearing the end of my first year, my sponsor group organized a barbecue out near some grills and a pergola next to our residence hall. A sponsor group is a group of 15-20 first years living in the same hall with 2 sophomores (the sponsors) and, together, you essentially become like a family. That day, the sun was shining, we were playing music, eating veggie burgers and hot dogs, making some s’mores, and life just felt good.

Number 2: Being a PAYS TA

This is technically during the summer after my first year, but it is too special of a moment to not include. PAYS (the Pomona College Academy for Youth Success) is a Draper Center month-long, residential summer program for students from under-resourced high schools. I became a Teaching Assistant, meaning that I and my co-TA looked over about 20 students, helping them with writing, math, and self-development skills. I felt like I grew as a person, but, most importantly, these kids saw growth in themselves and thanked me for it. I have never felt like I’ve made such a big impact on people’s lives as I did that summer. 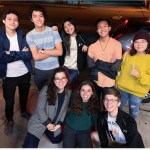 Throughout all of these moments, I kept meeting people. Somewhere along the way, I realized they were my people. You know, the people you know you’ll grab meals with not only the next couple years while at Pomona, but even 10 or 20 years from now. I realized they were the people who keep me grounded, who make me feel happy and give me so many reasons to smile every day. They’re the highlight of my first year, and the reasons I can call a place like Pomona a place like home.