In early March, the Pomona-Pitzer Women’s Tennis Team saw its journey to the Division III National Championship that would be held in St. Louis in late May abruptly ended by the spread of the novel coronavirus. Although my teammates and I were far from completing our spring season, I am immensely proud of how much we accomplished in 2020. 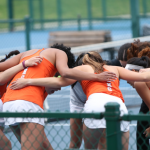 After seven weeks of practice and eight dual matches, we maintained a top ten national ranking in Division III and had placed fourth at the Intercollegiate Tennis Association (ITA) Division III Indoor Nationals, with a commanding win over the No. 9 MIT Engineers as well as close losses to the No. 3 Emory Eagles and the No. 5 Carnegie Mellon Tartans. In the Southern California Intercollegiate Athletic Conference (SCIAC), we were undefeated, with wins in six doubles and twelve singles matches against the Whittier Poets and the Occidental Tigers. Outside of our division, we notched wins against both the Division I Colorado State Rams and the Division II Cal State LA Golden Eagles, while losing in a tight 3-4 battle to the Division I Army West Point Black Knights. 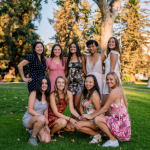 As my teammates, coaches, and I now find ourselves scattered across the United States, it’s easy for us to think about what could have happened and what would be happening if the virus had not taken the world by storm. However, I cannot help but be thankful for all the morning lifts, footwork sessions, tennis practices, meetings, visualizations, and bike workouts that we had together during the short fall season, the longer fall off-season, and the abridged spring season. Within just seven weeks, we were not only steadier, faster, stronger, and tougher but also ready for some fun matches with other nationally-ranked teams in Division III, SCIAC teams, and the Division II UC San Diego Tritons. 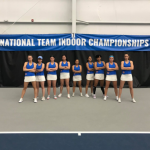 Off the court, the nine of us were the most closely bonded we have been in my three years as a Sagehen. We enjoyed a competitive scavenger hunt around the Claremont Colleges and the Village (Claremont’s downtown) at the end of our first week of practice, a clinic with our local Special Olympics athletes, daily team dinners in Frary Dining Hall, and numerous late-night study sessions in the Smith Campus Center, Pearsons Hall, and Millikan Hall. And, at the Indoor Nationals in Kentucky, we cooked breakfast together, watched basketball games, baked chocolate chip cookies, shared ice baths, played in the snow, and screamed “GO HENS” at the top of our lungs.

After spending three years on the team with our three seniors, I am amazed by how much they have grown as both tennis players and leaders. Each one of them made significant strides in their games as well as lasting contributions to our team culture. I know that my coaches, first- and second-year teammates, and I will miss them dearly. With an unrealized vision for the 2019-20 season, I hope that we can make this year’s seniors and older alumni proud when we return to campus for my fourth and final spring season as a Sagehen in 2021.