After many years spent dreaming about the city of white nights, opulent Tsarist palaces, and old Soviet metro stations, my semester in Saint Petersburg got off to an anticlimactic start. I touched down at Pulkovo Airport on an overcast, Wednesday afternoon. Itching to finally meet the storied city, I deboarded the plane to find myself in a listless airport. It was 2:30 pm, three hours before the other program participants were due to arrive. Excitement and anticipation clashed with a feeling of banality as I awkwardly lugged my suitcase to a Starbucks, where I settled into a leather chair and waited for the others. 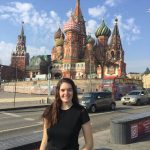 Fatigue tempered my excitement even as my new friends arrived and we were introduced to the dark, wintry evening. Max, our program director, herded us onto a bus where I promptly fell asleep, head against the window, struggling to keep my eyes open. An hour later, I woke up to a sight that struck me with wonder in spite of my exhaustion: the cityscape of downtown Saint Petersburg. Wide boulevards sweeping through unbreaking, pastel facades were dotted with plazas, gardens, and cathedrals. Snow flurried over broad avenues lined with baroque buildings, warmly lit by golden streetlamps. Nevsky Prospect, the main hub of the city, was bustling with people. Turning a corner, we came face to face with Kazan Cathedral, two wings of the building spreading wide like open arms.

Herzen University was located in the center of the city, on a closed campus tucked behind this cathedral. The bus rolled to a stop, and we settled into the residence halls for another two days of orientation. While a couple students chose to stay in the dorms, most opted to move in with a host family after orientation. Eager to maximize my language gains and build relationships with locals, I had no doubt about my choice to live with a host family. Still, the thought of living with strangers and depending on my Russian skills was daunting. Max tried to placate my nerves, reassuring me that my host family was an easy-going, sociable bunch.

He was right. The Pak family is a well-travelled Korean-Jewish family who love to invite guests into their home and socialize late hours into the night. My host mom, Elena, was kind, convivial, and quick. Leonid, my host dad, was courteous, gentle, and measured. Dinners were inspired by a variety of delicious Korean, Russian, and American cuisines and guests always lingered, chatting over tea and sweets late into the night. On several weekend mornings, Leonid would have buttered bread and Turkish coffee waiting for me when I woke up. Even as I struggled to understand his slow, gruff manner of speaking, he’d stay at the table, patiently talking with me for hours. My host sisters, Anna, Maria, and Sofia, were upbeat, outgoing people who made me feel at home in Petersburg and comfortable speaking Russian in spite of my mistakes.

My life in Saint Petersburg quickly began to take shape. After just weeks, I felt at home navigating the city’s streets and metros. I became a familiar face at my favorite cafes and bread trucks on my walk to school. When I wasn’t studying Russian, I saw the city on foot with students on the program or Russian friends from conversation club. Weekends were spent pursuing a constant quest for the best khachapuri (a baked, egg-topped Georgian cheese bread),  exploring museums and parks, or taking trips from the city. Some of my favorite memories abroad are traveling by train, ice fishing in Murmansk, and spending a weekend in Moscow.

Landing at Pulkovo Airport nearly three months ago, I could have never anticipated the memories and relationships I would build abroad. I also never imagined having to end my semester prematurely. Through the abrupt transition back home, I’m realizing that my itch to visit Russia can’t be satisfied with my short time there. I miss the family and friends that had so quickly become home. Through it all, my resolve to immerse myself in Russian has only become stronger, and I can’t wait until the next time I’m able to land at Pulkovo Airport.