As I’m sure you all know from doing your extensive Pomona research (and from many of my peers’ blog posts) all the first-years at Pomona are placed into groups called “sponsor groups,” which consist of the people you live in a hallway with your first year. Two sophomores (or, in my special case, three because our sponsor group was super cool like that) will live in the hall with you first-years and act as mentors and your “sparents” as you navigate the incredibly exciting yet very scary world of college (especially if you’re very far from home like I was). 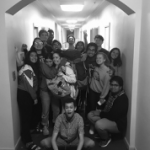 Your hallmates are now your “spiblings,” and together you are a “spamily” which I thought was the most adorable thing ever. We were called “Mudd2Fried” because our spamily was bigger than usual as we took up both the side hall on the second floor of Mudd dorm and the front hall of Mudd, thus combining front+side to = “Fried”. The fact that we had DOUBLE the number of spiblings in our sponsor group than the average spamily made my experience even more meaningful and special.

I can’t even express how incredible sponsor groups are and how much of an impact my spiblings had on me and my positive college experience. We were literally known on campus for being the closest sponsor group who “always went to dinners together, even if it wasn’t a sponsor group dinner night” and basically inhabited each others’ rooms at all times because we really didn’t have any boundaries due to our closeness. As clichéd as it might sound, we truly were a family.

I have created my best memories and met many of my best friends at college through my sponsor group, something that many people can’t say they’ve done. It’s a very interesting concept and can either work out extremely well or not so great. In my case, I got incredibly lucky as I and my spiblings, especially my roommate, got along so well and constantly made each other ache with laughter (thanks to those endless, pretty much nightly, late-night talks in the hallways or our rooms). I wanted to use this post to reminisce about my top 3 memories with my spibs my first year at Pomona and how excited you should be to come and meet your future spamily! (If you choose to attend!)

#1 The First Late-Night Talk (of many) 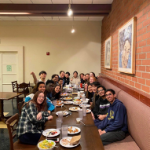 A classic Mudd2Fried hangout consisted of ten or eleven of us splayed out on the floor of our “special” hallway (it felt like we had the entire second floor to ourselves because we basically did) or cramped in my spibling Ella’s cozy single (shout-out to her incredible, pink, fluffy floor pillow and interminable supply of Smarties and hot chocolate). There was honestly nothing that made me happier in my first year at Pomona than those late-night conversations with Ella, or Rohan, or Louie, or Ayo or Pich (and all my other spiblings, love you all) holding my stomach and wiping my tears from laughter. We had so many hilarious conversations, yet just as many deep, meaningful and intense conversations about life as well. I can safely say that these conversations at 2, 3, even 4 or 5 a.m. some weekends shaped my identity and persona as these were the first people I truly connected with on a deeper level while at Pomona, and I know I will be very close friends with them for the remainder of my time at college.

We packed the cars with snacks, sunscreen, towels and extra clothes, and then we were off to Newport Beach, California. I still couldn’t believe it. I couldn’t believe that I actually lived in sunny Southern California with all my closest (or soon-to-be) closest friends. It was the beginning of September, and classes weren’t in full swing yet (it was syllabus week which means relaxation and no real work yet) so my sponsors decided to organize a trip to one of the many beaches along the SoCal coast. I knew all my East Coast friends would be incredibly jealous of me as they all stayed back in the freezing Northeast weather for college. Because of our abnormally large sponsor group, we had to cram into two large vans in order for everybody to fit, but then we were off!

We arrived, and the sight was absolutely breathtaking. I used to live in Southern California (Newport Beach to be exact), so to reconnect with that raw, ocean beauty was exquisite, absolutely dream-like. The glittering emerald-blue waves lapping softly onto thick deposits of smooth white sand littered with colorful shells was straight out of a postcard my family on the East coast would be viewing with envy later. I couldn’t wait to run down the side of the cliff we stood atop of and sink my toes into the refreshing, salty water. 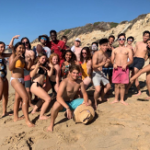 Some of my guy spiblings and I instantly ran into the freezing water and started body surfing and laughing hysterically in the waves (the other girls were all too afraid of the cold water and stayed on shore, dipping their toes into the water and running away instantly). I was so happy, I couldn’t believe all of this was really happening, and it was really just the beginning of the best year of my life. Eventually, the waves grew too rough and the riptide too strong (California problems, unfortunately), and so we resigned ourselves to munching on snacks while sitting on our towels in the sand. We got to know one another and talked to each other, I mean really talked to each other, for the first time because all the other times were awkward orientation breakfast, lunch and dinners that were somewhat forced and uncomfortable. I realized in this instant how lucky I was to get to live with these amazing humans for a full year.

October 31 is a very important date in the lives of college students. It’s a date where everybody can pretend to be somebody or something that they aren’t and have fun and go out with their friends. My spiblings and I love Halloween. We had such a great time making ourselves up, putting on random and haphazard costumes and dancing the night away. 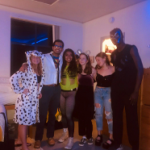 Having a group you can go out with on the weekends is a CRUCIAL aspect of college that I was definitely nervous about and wanted very badly. Having these built-in best friends surrounding me was incredible in establishing this group that I knew I could always count on to have a good time with. We blasted music on all our Alexas (because we all bought them at the same time for this exact purpose) and you could definitely hear our pop hits playing from miles away, but we didn’t care. We laughed and ate all the candy we could get our fingers on (we had a little hall trick-or-treating where we all knocked on each other’s doors like they were houses and exchanged candies. It was truly a great time). Some of my fondest and most fun memories are from Halloween night, and that entire weekend in general, because it was the first real holiday and special occasion that my spiblings and I spent with each other. It was an unforgettable milestone that I will cherish for the rest of my college years.