I was elected Secretary General of Pomona College Model United Nations three weeks before all students had to evacuate campus.

COVID-19 was something we’d only heard about in news stories and memes, but now we were going home, spreading out all across the country, with no clue as to when we’d return. As time went on, and it became more and more clear just how long we would be away, the MUN team was faced with a crisis. 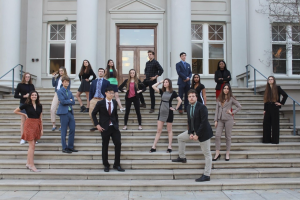 In a normal year, our 21-member club would be traveling all across the country to compete in conferences and tournaments against dozens of other schools. Our members would simulate historical events, draft plans to handle global crises, and enjoy spending time with our teammates and the greater community. Now we couldn’t even meet in person, much less travel. I had just finished my freshman year, and now I was dealing with a 95% reduction in budget grants, sick teammates, a traditional recruitment strategy that had become obsolete overnight, and no idea as to what an MUN team was supposed to do during a pandemic.

Luckily, I wasn’t alone. There were three other members of E-Board, other elected leaders of the team that I led. Obviously, they were just as unprepared as I was and just as scattered across the country as the rest of the team. One elected member of E-Board was actually on a study abroad program during the outbreak, and to this day I’ve never met him in person.

We met, we thought, and we came up with something new.

As neither hosting nor attending conferences were possible, it was time to pivot and adapt to the world we now found ourselves in. Since our classes, work, and even social activities were turning to online platforms to continue, we at PCMUN decided to do the same.

With that in mind, we announced “The New Normal” PCMUN Speaker’s Series, an interactive virtual webinar open to students, faculty, parents and alumni. Using livestreaming and video conferencing technology, experts from around the world are now giving the inside scoop on how globalization, economic upheaval, the COVID-19 pandemic, race, and other forces are impacting their fields.

We took on our new roles. I would find the speakers and coordinate with the Pomona administration, while others handled promotion and event logistics. I raced onto Pomona alumni social media groups, asked family and friends for contacts, and did some good-old-fashioned cold calling. Like the branches of a tree, one contact would lead to two more, who might know another, and so on. The more I reached out, the more things snowballed.

And wouldn’t you know it, but a former US Ambassador to China was thrilled by the idea and agreed to speak. We hosted him in early September, and the event was successful in forcing attendees to really engage with the discussion, and it left people thinking long after it ended.

But this is only the beginning. I’m working closely not just with the members of the MUN team, but with the College, speakers, and more. I’m getting in contact with people in Alumni Relations to drive awareness among that community, as well as enlisting deans to spread the word to the student body, academic departments relevant to the speaker’s field, and other clubs that might want to encourage their members to attend. Everyone on our team has something to do, something we created on our own initiative. The MUN team has always been a place for discourse, and we’re not letting a pandemic get in the way of that. We believe in our project because we know that, at the end of the day, no matter what happens, we’ll always be able to come together to talk about it.