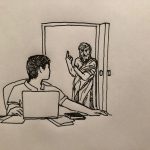 My housemate just knocked on my door, walked into my room, proceeded to rant about the meaning of life for five minutes, walked back into the hall, and closed the door behind him. This is the fourth day in a row he’s done something like that. Yesterday the talk was about the ego and the id. The day before that, psychoanalysis. Then it was how you can never truly “know” someone. Or was it chakras?

These don’t all happen regularly, mind you. I never know if he’ll knock halfway through my 8:40 AM Intro to German class or while I’m brushing my teeth before I go to bed. I almost started to get annoyed by it, but sometimes when you’ve beaten your head against an econ problem for an hour, finding the meaning of life can seem a lot easier.

I’m living with three friends in a house in California. We’ve got plenty of room, internet for online classes, and a nice little community when the sky isn’t raining ash from wildfires. 2020 has thrown a lot of weird things our way, so sometimes it’s nice to focus on something as simple as the nature of a human soul. 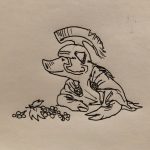 I’ll call that particular roommate The Surprise Philosopher, for clarity’s sake. In the living room right now is my second roommate, Pig Latin. To imagine how most interactions between us go, one must visualize someone reading at random from a dictionary. The words might make sense individually, but the order in which they are strung makes them completely incomprehensible. We have developed a language of references and inside jokes so bewildering to the outside observer, we have even used it to discuss sensitive issues in the presence of others without drawing suspicion. Most codes are created out of intentional design; ours has developed, nay, evolved over the course of countless interactions. Toss in his full-fledged obsession with Roman history, and the moniker feels apt. 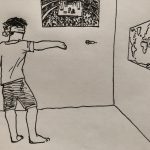 My last roommate is The Globe Theatre. I like to believe that one day The Globe Theatre taped a large map of the world to a wall, grabbed three darts, blindfolded himself, and threw the darts towards the wall at random. Wherever those darts landed, he decided, would be the cultures he would dedicate a greater part of his life to. I say this because the man practices Kabuki, a form of Japanese theater practically unheard of by most in the West, is a learned mime, and speaks Basque, a language spoken by people living on the western half of the border between France and Spain. Not only has he made us watch a full-length Basque animated film and celebrated “Basque Diaspora Day,” but he also runs Pomona’s Kabuki Club and is a teaching assistant for an online mime class. The real-life Globe Theatre in London was where Shakespeare’s most famous works debuted. My roommate dedicates himself to performances I’ve never heard of.

Oftentimes, I’ve been asked what it is exactly—beyond the adjectives like “smart” and “driven” that go on brochures—that “makes” a Pomona student. “Eccentric” certainly isn’t right, and neither is “quirky.” The best word, I believe, is “passionate.” I look at all the people I’ve met at college, and all the people I’m yet to know, and I see individuals who are bubbling with enthusiasm for a conversation. There are so many awesome people who can’t wait to tell me all about something I know nothing about. Birdwatching. Heavy metal. Bolivian politics. Get enough Pomona students in a room together, and I swear you’ll do better than an encyclopedia. And even though I’m not at Pomona right now, I know that I’ve brought some small part of Pomona with me by living with The Surprise Philosopher, Pig Latin, and The Globe Theatre.