When I returned home from campus in March 2020, little did I know that I would spend nearly every single hour of every day in my house for the next year. Having grown up in a small town, I had always valued experiencing different environments. So much for that. It’s no wonder I became interested in participating in Pomona’s domestic exchange program with Swarthmore College during the spring 2021 semester. With Swarthmore in my home state, I held out hope that the program would move forward, but, like many other events during the pandemic, it was cancelled. Perhaps, in an alternate universe, I would be a Swattie instead of a Sagehen right now! 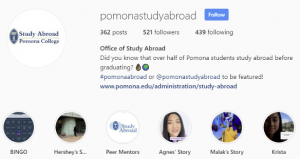 However, as the saying goes, “When one door closes, another one opens.” Given the pandemic, I wasn’t seriously considering studying abroad next year, but towards the end of the fall 2020 semester, I decided to attend a mandatory study abroad information session just in case. I also Zoomed into some program-specific meetings, including one about the Oxford program. Coming in without expectations or knowledge of , I was surprised by my own growing excitement as I heard returning students talk about their experiences there.

Located in the United Kingdom, Oxford runs on the tutorial system, where students meet hourly once a week with their “tutor” (or professor) in an intimate one-on-one or small group setting. That structure allows for deeply individualized discussions, while requiring much independent exploration in between tutorials. As someone who thrives given personal interactions and self-driven learning, the program sounded like an amazing opportunity.

After the info session, the application deadline was in four weeks. In that time, I’d need to complete my applications, secure two recommendation letters, and submit my tutorial request forms. Did I want to commit my entire junior year to a study abroad program that I had just found out about?

Luckily, I had so many people supporting me through the decision-making process. First, I made an appointment the next day with the assistant director of study abroad, Lindsey Kogasaka, to talk through my initial thoughts and feelings. Lindsey was incredibly nice and helpful, asking me guiding questions and pointing me to possible resources. We also connected over our mutual interest in tennis, and, while still undecided, I left the meeting feeling more reassured about how to move forward.

After a weekend spent sitting with my thoughts, my advisor, psychological science and Asian American studies professor Sharon Goto, was kind enough to meet with me on Monday to talk about how the Oxford program would work with my psychological science major. She was so supportive and told me how she thought the program sounded “perfect” for me. Fortunately, with some planning, the flexible curriculum of a liberal arts college made spending two semesters away from campus a real possibility.

Later that week, I FaceTimed two students who participated in the program last year. Oxford has 45 different colleges, and two of them — Lady Margaret Hall and St. Edmund Hall — accept visiting students from Pomona. In addition to sharing why they chose their specific college over the other, they graciously answered many other questions about their experiences, student life and academics at Oxford, and what it was like to spend so much time away from campus.

While most of my initial questions were addressed, it felt like the answers only led to a whole slew of other questions. Still mired in indecision, I set up an appointment with the director of study abroad, Nicole Desjardins Gowdy. By now, I knew that I wanted to apply, but I wasn’t sure which college to apply to and how to approach the competitive admissions process. Nicole pointed me towards another available resource:

Along with Pomona’s application, I also had to submit materials through IFSA-Butler, the organization that forwards completed applications to Oxford. While no longer in charge of advising Oxford applicants, the IFSA-Butler representative was extremely friendly and well-versed in all things Oxford. Finally, after this call, I reached my decision and felt good about it. I was going to apply to Lady Margaret Hall at Oxford for their Experimental Psychology program.

At this point, I had about three weeks until the application deadline. I went over my application draft with a wonderful partner at the Writing Center. I completed my tutorial request forms, uploaded the requested writing samples, and finalized my essays. However, it wouldn’t be an application process without a snafu along the way.

It was the day after Pomona’s application deadline and… one of my recommendation letters hadn’t been turned in. I distinctly remember a sense of panic and dread that accompanied that day as I tried to figure out a replacement. Mercifully, the study abroad office gave me a few grace days. Whew. Now to find a professor who would be willing to write a recommendation within two days when the usual advice is to contact recommenders 2-3 weeks in advance?! I wanted to give up.

Instead, I emailed my advisor about the situation, and she responded almost immediately. Her promptness and accompanying action plan reassured me and pushed me to keep trying. In measured desperation, I composed emails to my other professors. I just needed one to come through… and two were willing to write a letter! One was a psych professor from my intro course my first semester who I didn’t know super well. The other was not a psych professor, but I had worked more closely with her. Was it better to have a recommendation from someone in the department that matched Oxford’s specialization?

At that moment, I remembered that I still had the contact information for the Pomona student who attended Lady Margaret Hall. I crossed my fingers and hoped it wasn’t too late to reach out. Although I did not know this person well, I gave him a spontaneous call, and he picked up! After kindly listening to my flustered explanation of the situation, he shared his insider knowledge and perspective on Oxford admissions, and I went with the professor who I knew better.

Everything worked out, and I ended up receiving my acceptance about six weeks later in late February. To put a concluding cherry on top of this all, I won’t know if Pomona will sponsor travel for my study abroad program until June. Will it be all for naught? Whether I can go to Oxford or not, I know that I will still be content if I end up nestled within the Pomona community next year. I talked to seven (!) different people, who all offered so much support and guidance. This is not an exception. While the College has its faults, it truly is such a caring environment; I have so much gratitude for the opportunities and people in Claremont. While I would be disappointed if I had to close the door on Oxford, all that means is another year, another set of doors that are waiting to be opened at Pomona.