With finals looming and the bucket-load of assignments professors are piling onto students, it’s easy to feel overwhelmed and find procrastination more and more appealing. As a burnt-out first-year dreading the few days I have left to turn in papers and finish projects, I’ve been finding any random reason to push aside my assignments. Today, I convinced myself that it was more important to go through and organize my camera roll than work on my history readings. I can just do the reading later tonight, I tell myself, but my camera roll, it’s been taking up space in my phone for year! If I don’t do it now I’ll never organize it. This mental battle between my thinking brain and my feeling brain usually lasts about 20 seconds, and, at the end, my feeling brain has won.

While scrolling through my phone I stumbled across photos from 2018 of different types of birds at a pond. A surge of fear shoots up my spine as the traumatic memory I so deeply tried to hide resurfaces. During winter break in 2018, my siblings and I visited my aunt and cousins in Houston, Texas. It had been over six years since I’d last visited my aunt’s home. Unlike the busy and diverse city neighborhood in Chicago that I grew up in, my cousins grew up in a quiet gated suburb of Houston.  The social, physical, and political differences of the two environments isn’t what I’m here to write about today–though those were pretty shocking. Instead, I will be focusing on the terrifying walk my sister and I had around the local pond. 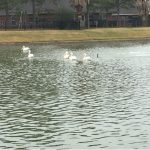 The first time my little sister and I visited the gated pond was with my aunt. Seeing the huge pelicans clustered in one corner of the pond, the black fish-eating birds in another, and the ducks and geese gathered near the edge of the pond was terrifying.  Compared to the fat pigeons and tiny birds I witnessed back home, these creatures seemed completely foreign. As if recognizing an old friend, the ducks and geese started waddling towards my aunt who held a bag of old bread in one hand and, with the other, tossed pieces of it on the ground and into the pond. Shocked by how the birds walked straight to her, uncomfortable by the proximity, my sister and I distanced ourselves from our aunt until all the bread was gone and the birds returned back into the water. 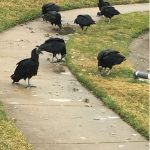 After visiting the pond with my aunt a couple of times, my sister and I naively thought that we could walk to the pond on our own. Before leaving the house, my aunt handed me a bag of old bread to feed the birds. My sister and I decided that we would feed the birds at the end of our walk, so when we went through the gate and started walking around the pond everything seemed normal. However, as we reached the halfway point around the pond we noticed some birds ahead blocking our path. Instead of walking away or returning into the water they started walking toward us making loud quacking noises. Startled by the fact that the birds were now following us, my sister and I calmly decided to walk back where we came from. The quacking didn’t stop. When we noticed a new flock of birds swimming toward our escape route, trying to block our pathway, panic flooded our bodies. My sister and I were in the middle of the pathway with birds chasing us from behind and birds slowly closing in from ahead of us. 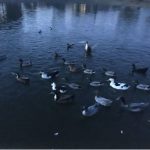 Trapped, convinced that we were going to be poked to death by birds, we screamed. I instinctively threw a piece of bread in the water. Luckily the birds in front of us dove into the water, slightly clearing our path to safety. We sprinted toward the entrance and, realizing that I still had more bread, the birds continued to chase us until my sister and I ran through the gate. Loud honking and bird cries filled our ears as if annoyed that they couldn’t stop us in time. My sister and I didn’t stop running until we reached my aunt’s block, occasionally even glancing back to see if the birds were following.

Within the safety of my aunt’s front porch, out of breath and covered in sweat, my sister and I handed my aunt the bag of old bread. Confused and concerned that her two nieces were lying on the floor in exhaustion and laughing like lunatics, my aunt listened as my sister explained how we were almost killed by birds over a bag of old bread. To this day, I still shiver and feel a rush of adrenaline if I hear a QUACK.

Looking back at these photos, I remember the feeling of being trapped at that pond and, surprisingly, I feel the same way right now. But instead of scary birds bombarding me, it’s college assignments bearing down on me. Instead of standing still and letting these assignments stack up, I guess I will once again have to find an escape route from this scary cycle of procrastination that is closing in on me.