In the months leading up to the US presidential race, my Instagram was flooded with messages telling me to register to vote. Whether it was Cardi B, the kids from Stranger Things, or my fellow classmates, all seemed to want one thing: for me to exercise my civic right and vote.

Luckily for me, I was already registered and, by the time October came, I had mailed in my ballot and would be able to avoid the long in-person voting lines. Even though we were all in a pandemic, it was inspiring to see classmates perform their civic duty. In the first couple of weeks of school, some first-year members of the Pomona Votes team reached out to me to make sure I was registered and to answer any possible questions I had about the voting process.

Being able to vote in such a big election for the first time made me feel like, within my fingertips’ reach, I had the power to drastically change US policy and the political agenda. As an American citizen, I have the privilege to participate in an important part of democracy. Having grandparents who fled an authoritarian government that lacked basic democratic principles constantly reminds me to exercise my right to hold people in power accountable. 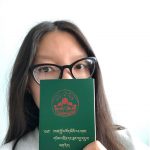 So, when November passed and January rolled by, unlike many of my peers, I had to vote again for another “presidential” race. Since I am Tibetan and a Green Book holder, once I’m eighteen I am allowed to vote in the Central Tibetan Administration’s (CTA) elections. The Green Book is given to Tibetans in exile who pay a small yearly tax to the Tibetan Government in exile. These taxes help fund the government and provide benefits to holders such as eligibility to work for the CTA, scholarships, voting rights, etc.

Every five years, the spot for Sikyong (president of the Tibetan government) is up for election. Although the Tibetan Government in Exile is based in Dharamshala, Tibetans are in various parts of the world. Hence, instead of going to India to vote, Tibetans outside India can vote at local Tibetan community centers.

This January was my first time voting in the Sikyong election. When, all masked up, I entered my community center on election day, Tibetan parents and elders who I have grown up with jumped in excitement. “Wow, Sonam, you can already vote now?” an Aunty exclaimed in shock as she checked the voter registration sheet. Since I grew up in a small Tibetan community, everyone knew everyone. So, as I passed through the voting booth and submitted my ballot, the election workers cheered. Even though we were all six feet apart and wearing masks, the warm and supportive energy seemed to engulf me. Looking back at both of the times I’ve voted this past year, it’s empowering to see how even a pandemic can’t stop people from voting.