If I could get a dollar for every time I’ve heard that phrase uttered to my face, I’d be a millionaire. It’s wild how it’s often the people closest to you–relatives, community members, family–who constantly remind you that you don’t belong. I never felt as uncomfortable with my Tibetan-American identity as I did when I visited the nation’s hub of Tibetan Americans, New York City, in 2018.

Coming from a small Tibetan community of around 300 members in Chicago, I was excited to be surrounded by people who looked like me and had the same background as me. I would be taking a walk outside of my aunt’s apartment and would see Tibetan kids playing at the park or hear Tibetan mothers gossiping in Tibetan. My name, which was so unique for my non-Tibetan peers, was so common in the Tibetan community in Jackson Heights that it felt like I met a new Sonam every single day. The sight of folks eating momos on the street or old Tibetan grandmas wearing chupas (traditional Tibetan clothing) made me feel at home.

However, once my aunt introduced me to Tibetan folks in the neighborhood or some distant relative of mine, that feeling of home turned into a feeling of shame. And the source of the shame? It was none other than my Tibetan language skills. While I could understand what my relatives said to me, my lack of fluency in Tibetan prohibited me from giving a grammatically correct response. 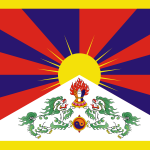 As my relatives and other Tibetan folks started asking me more specific questions in Tibetan, beyond my limited knowledge of grammar structure and vocabulary, they seemed to have discovered a secret I so desperately wanted to hide. Even though I understood Tibetan, once they detected my lack of fluency in speaking Tibetan they would switch over to broken English. Some would ask me why I wasn’t fluent. I obviously couldn’t unpack my childhood desires for assimilation, internalized racism, lack of access to resources, and the many other underlying factors behind my low speaking ability. To them, they were excuses, and maybe they are. So instead, I stayed silent and impulsively decided to speak English for the entirety of my stay. When I tried to speak Tibetan I would be shamed. When I spoke English, I would be shamed too. So why not just give up entirely?

While I know that the comments on my Tibetan were out of good intent, they further distanced me from embracing my culture and language. Prior to the visit, I had been attending Tibetan language school on Sundays for years at my community center, yet I hadn’t been improving as quickly as I wanted to. After the visit, a surge of hopelessness emerged, and my desire to continue practicing and learning Tibetan diminished. This feeling of apathy lasted for around a year. I would love to say that there was this one specific moment that inspired me to change my attitude, but there wasn’t. One day, I just realized that I didn’t want to give up on learning my mother tongue. I wanted to be able to talk to my grandparents with ease and be able to communicate with those in my community. Plus, since I plan to major in International Relations with a focus on Tibet-China relations, being fluent in Tibetan would be very beneficial.

Even though the 5Cs don’t offer any courses in Tibetan, Pomona has resources for students who want to study a language outside of those offered. Although my first year of college has been done remotely, through the Oldenborg Grant, I will still be able to access funding to enroll in an immersive remote Tibetan language program in the summer. With the grant, I’m not only able to fully cover the fees of Tibetan language classes through the School for International Training, but I have an abundance of money left that can help cover the amount I would have made if I was working. Hopefully, I will leave the program more proficient and confident with my Tibetan.