Before coming to college, having watched one too many college roommate horror story videos on YouTube, I was a little worried about having a roommate. I thought that, if I had one, I would be lying awake in my bed with one eye open, afraid that they would cut my hair in my sleep or pee in my shampoo. For me, the fear of potentially having a terrible roommate far outweighed the potential that I could have an amazing roommate. 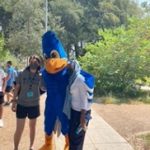 I quickly messaged her on GroupMe. Her dog, Sonic, showed up as her profile picture, which put me at ease. I messaged her and knew right away that we would get along. We started coordinating what things we would each buy for our room and sharing our design schemes. 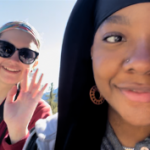 Over the next year, Cecilia would become one of my favorite people on campus. We both loved decorating our room and were convinced that we had the nicest decorated dorm on all of South Campus, and everyone who came into our room left in awe.

Cecilia and I grew close enough to have four plant children together. The first, Pookie Peralta, we adopted soon after moving into our room from a nursery in the Village.

Cecilia was also into all kinds of arts and crafts and had so many cool gadgets. She had this Polaroid picture printer which was absolutely insane and something called a Cricket which could print out anything you wanted in sticker form. She is also really into architecture and photography; she hates mint; and she loves to wear flip flops with socks simply to horrify me. Cecilia is so kind and considerate: she’s the type to get you a gift you will absolutely love because she made a mental note of the one time you said you enjoyed something. 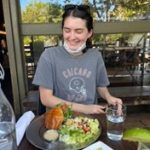 Cecilia also had skills I grew to appreciate. She is an amazing driver who can navigate the twists and turns of Mt. Baldy’s windy roads. She also knew the names of every street on campus and basically had a map of the Claremont Village imprinted in her brain. She doubled as my personal photographer (the best photographer, if I do say so myself), taking some of the most iconic photos for the 2000s Party, the Yule Ball, and the Redemption Prom.

One of my favorite memories with Cecilia is one Friday night deep into finals week when stress levels were high, and I had three finals to study for and a final essay to complete for a philosophy class. Amidst the chaos, we went back to a tradition we had created earlier in the semester and listened to music with one another.

We created some of our very own traditions like Just Dance nights, where we would destress by dancing like maniacs around our dorm room, and Tea Nights, where we would drink some delicious herbal teas Cece had in her collection, teas being just one of the many things Cecilia collected along with playing cards, tee shirts, and cutlery. 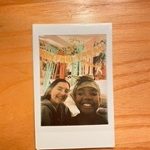 Another memory that stands out is a day when we both woke up feeling terrible, and we decided not to go to classes that day. When we finally got out of bed, we made the trek to Hendricks Pharmacy in the Village and stocked up on medicine (pro-tip: bring medicine to college). When we dragged ourselves back to our room we made instant noodles and put on a movie that we paid absolutely no attention to because we were too zoned out. I just went back to bed, thankful to have Cecilia nearby.

Cecilia definitely helped me de-stress many times during the school year and was one of my main support systems. Having Cecilia as my roommate provided me with so much support my first semester, and I can’t imagine going through my first year without her. Although Blaisdell 119 was my freshman year dorm, it was my roommate Cecilia who made it my home for the entire year.