It’s the third week of school, and I’ve said the words “I’m Arie” more times than I can count. It’s strange meeting so many people and wondering which of them will feature in the memories everyone says college is about. In these first three weeks, I’ve tried my hardest to attend every event, dance, and group dinner in the hopes of finding “my people.”

I came from a relatively small school where I knew almost everyone, so, coming to Pomona, I expected to feel at least a little overwhelmed at first. From the moment my family’s rented minivan pulled up in front of Harwood Court, I knew I would have so many options here. There are so many people to connect with, clubs to join, and majors to choose. Pomona is like an all-you-can-be buffet.

I quickly learned that meeting people was the easiest part of this whole process. I meet people constantly. I live with a group of first years, called a sponsor group, and we have dinner, attend meetings, and walk around campus together. We’ve really started getting to know each other, and I am always happy to see them around. Similarly, I meet new people in classes and through other shared interests. It hasn’t even been a month and I can confidently say I know the names of at least a hundred new people. (I promise it’s true!)

Meeting people is the easy part, what’s harder is building on that. It can feel super scary to ask someone who’s practically a stranger to have breakfast with you. Or to ask the person sitting next to you for a pencil. It feels like if you make any part of yourself vulnerable, you risk being shut out. Often, I worried that I wasn’t meant to be here and that my coming was a huge mistake.

Soon enough, though, I had to open up and tell people more about myself than just my name and where I’m from. I dove into vulnerability with one of the people I met on my OA trip to Malibu by asking them what the book they were reading at the beach was about. Soon we found ourselves debating feminism in sci-fi and if human nature can be binarized between good and evil. My simple question turned into hours of engaging conversation that resulted not only in many great book recommendations, but a friendship I hope to grow.

From the moment I arrived on campus, I began this self-driven race to find my place at Pomona. I wanted to find my people, my major, my favorite study spaces, and places to get coffee as quickly as possible. And at first, it really scared me that it wasn’t happening at the speed I imagined. I thought I wasn’t trying hard enough. I wasn’t putting myself out there. I wasn’t going to the right events. I was sure I had to be doing something wrong. It seemed like everyone had it together. Why was I still wandering around this new environment that felt like an alien planet? 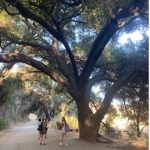 Soon I worked up the courage to ask people if they were confused too. They invariably said YES. They too were searching for their place here, and we took comfort in being confused together. We opened about what was hard and unexpected about coming to college, and after that I felt so much better about figuring it out. I realized these things really do take time. There is no super track to making lifelong friends or discovering Claremont’s best coffee. You just must try and try again. You can’t expect to build a home for yourself in a day or even a week, but if you remember that everything you’re doing now is taking you a step closer to getting where you want to be, the whole process isn’t so scary after all.