Contrary to its name, the Pomona College Glee Club is not a club, nor does it perform elaborately choreographed musical numbers. A long-standing tradition for over 100 years, the Glee Club is the small college chamber choir, and performs an a cappella repertoire of music from the 16th century to the present. Somehow I worked up the courage to audition at the beginning of the semester, encouraged by my two brave friends who also auditioned. I remember standing beneath the gleaming, custom-built, silver Hill Memorial Organ in Little Bridges Hall of Music, my hands shaking and slightly out of breath, as the choir director told us we had made it into Glee Club!

The next weekend we had Glee Retreat, a seven-hour rehearsal interspersed with meals and bonding games. The intensity of that rehearsal was an indication of the high level of commitment expected of us, as that is what enables us to make such high quality music. We have two rehearsals a week, plus a rehearsal with just the sopranos and altos. Spending so much time as a choir has expedited the friend-making process, as we eat lunch or dinner together almost every weekday. We often trade opinions on the pieces we are learning; popular topics of conversation include the strange lyrics in Benjamin Britton’s “Hymn to St. Cecilia,” the beautifully haunting though challenging melodies in Thomas Tallis’ “Salvator Mundi,” and the lovely, heart-warming message of John Clements’ “Flower of Beauty.” 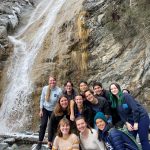 Glee Club is such a unique and priceless experience, not only for the music we make, but for the small and tight-knit community it fosters. Every member is not only dedicated to the art and craft of music-making, but also to creating a community. In fact, part of what makes Glee Club so fun are the social events we plan on weekends. Whether it be a team picnic or party, everyone is welcoming and quick with a joke. (Glee members particularly excel at puns!) 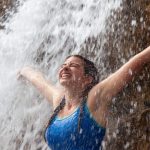 One weekend we drove up to the snow-covered Mt. Baldy to go on a hike. Thrilled by the glistening, powdery snow that blanketed the mountainsides around us, we quickly took to a snowball fight, after which we built a beaming snowman. We hiked to San Antonio Falls, whose silvery spray glittered as it flew through the air and over the bronze rock face behind it. Snow encroached upon the clear, icy stream as it flowed away from the falls, creating a wintry picture of peace. As soon as I saw the mystical cascade, I had the wild idea to go underneath the falls, and my friend agreed to join me! Barefoot in the snow, we approached the waterfall. With resolve we ran under the icy torrent and put our arms up, reveling in the frigid thrill if only for a moment before we dashed out from under the shower again, gasping for air. Our wide grins and our incessant shivering were irrepressible as we bundled ourselves in dry clothes.

While I am usually on the shy side, this group of accepting and bright-eyed people made me feel comfortable enough to let my adventurous side loose! This spring we plan to go on a concert on tour in L.A., and I can’t wait to spend more time with my fellow choristers. While we aren’t going to Italy or Spain like Glee Clubs of the past, I am still overwhelmingly grateful to have met such talented musicians who believe that what makes a choir great isn’t just the music we make, but also the community we build.