Last week, I had the opportunity to go on a language excursion hosted by Pomona’s French language resident. We saw the play La Machine de Turing about Alan Turing, the man who solved the German enigma during the second World War and is also credited with creating the earliest version of a computer, which he called “thinking machines.”

Though our excursion was into L.A., arriving at the theater instantly placed us within a pocket of Francophone culture. Everyone spoke French, and I found myself surprised at my ability to understand and participate in conversation. Though I love my Advanced French class I’m taking this semester, there is nothing more valuable in language learning than real-life, day-to-day experiences. And this outing offered just that. I’ve always enjoyed watching and reading plays, but I’ve never had the opportunity to watch a play entirely in French. 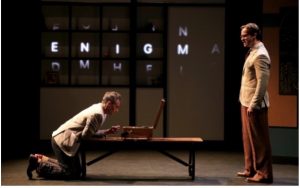 Throughout La Machine de Turing, Turing searches for the answer to the question, “Can machines think?” Despite facing constant resistance to this suggestion, he probes on. Turing amusingly compares the texture of the human brain to overnight oats and decides that the brain is really just an extremely complicated machine—a machine that is slightly altered in every one of us and that he believes is possible to reproduce.

This theatrical opportunity pushed me to critically think and understand a complicated, heart-touching story in another language. I was surprised to find myself laughing along with side jokes and feeling sympathy towards saddening monologues.  The play allowed me to experience French outside of the classroom and in real life. 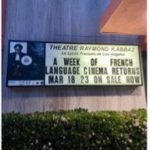 Learning a new language at Pomona has been such a full experience. From exposure to interesting films and novels in my Advanced French course to Oldenborg lunches where students at every table speak a different language, I have been refreshed in my pursuit of language learning.