Let it be known that until I went to Big Bear, I had only experienced snow once, and it wasn’t your typical Hollywood soft snow, but much rougher, frosty snow (the least of my complaints while 4,500 meters up Mt. Kenya, Kenya’s highest mountain, but that’s a story for another day). We’re fortunate enough that the 5C Ski and Snowboarding Club sponsors a couple of day-trips for beginners every year during snow season, taking us to Big Bear, about a two-hour drive from Pomona College. Come along for the ride as I share my adventure in the California snow. 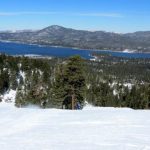 Here I am at Big Bear on the last day of the season in April 2022: the snow feels more like mashed potatoes than snow. I chose to learn snowboarding as opposed to skiing. Why? It’s cooler, and you can’t change my mind. I also thought it would be easier to learn, since I have experience with snowboarding. And when I say experience, I mean experience watching Disney movies like Cloud 9 and Zeke and Luther on DisneyXD growing up (ifykyk).

Contrary to popular (and personal) belief, the difference between snowboarding and snowboarding well is actually very great. At Big Bear you have your beginner slopes; all around are lift circuits to take you to other slopes with increasing levels of difficulty. Our group reached the lifts in the morning and, after three-four hours of me and the other beginners falling (please wear waterproof pants unless you want your butt cheeks colder than mine), involuntarily eating snow, and wishing I was instead spending my Sunday morning tucked and toasty in bed, I finally got the hang of starting, stopping, and moving on the snow with the board or, rather, not falling. 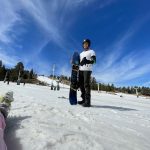 My biggest mistake was thinking I was anywhere close to snowboarding well after spending half the day learning to ace the beginner slopes. There’s something about conquering the bunny slopes that really hikes your confidence bubble—that and one of my club instructors, Carolyn, hyping me up when I occasionally moved more than three meters without tumbling (Shout out to Carolyn!). That confidence bubble quickly popped when I moved on to try the more intermediate slopes. On my way up on the chairlifts I gulped when I saw a kid casually speeding down on one of the advanced slopes called ‘The Wall’ (don’t even ask) and getting airtime on some jumps. Must be nice.

It will be fun, they said. Thirty seconds down the Summit Run, and you discover what true speed feels like, but at a cost. I tried veering a corner at top speed and, well, let’s just say my friend Mya had her fair share laughing at me as I rolled about 20 meters down the trail like a rag doll. After that, I took it a bit easy on the turns and got the hang of swaying and slowing down.

All in all, snowboarding at Big Bear was a fun, new experience, and felt almost surreal as I glided down the snow for the first time, and really got used to new body mechanics to navigate the terrain. If you haven’t experienced the snow much (or not at all like me), get some of the gang together and enjoy some time out at Big Bear next season! It’s definitely something I want to try again to perfect. See you on the slopes!