There are some moments at Pomona that have been truly essential to my experience – moments that cannot be conveyed adequately on any pamphlet or website – and it’s those moments that I missed sorely when I was gone. Although I, as many others, arrived to Pomona after an exhausting chain of travels (bus! train! airplane! then MetroLink!), hearing the squeals of excitement as friends united after a month of being apart made me feel energized and alive.

Returning to the sponsor group I’ve been with since day one, choosing to eat at Frank over Collins or Mudd just to bump into friends and spend two hours at dinner, engaging in an intense round of Resistance or Mafia… these are moments I had looked forward to as soon as break began.

But coming back to school also means coming back to the challenge of a new set of classes – which entails conquering a new schedule, exploring new academic departments, setting up my schedule to maximize efficiency, meeting fresh faces in my classes, and embarking on a new intellectual adventure!

A little about the course selection process: At the Claremont Colleges, we choose classes around week 11 of the previous semester, and each person is randomly assigned a registration time. Usually, if a student has a great registration time one semester, he or she may have a less ideal time the next semester. Students are able to consult ASPC course reviews for former students’ comments on courses, and many students spend hours mapping different possible schedules in case one of their courses is full by the time they are able to register. During registration week, seniors get first priority, while first-years register three days after seniors do. At first, I was really frustrated with my inconvenient registration time; after realizing my top choice classes had filled up hours ago, I spent a frenzied 30 minutes seeking out new classes around the ASPC website as PERM lists (i.e., requests to join filled classes) grew longer and longer. I sighed as an unwieldy schedule, filled with classes I never initially considered, stared back at me.

However, after a day of trying out classes, I’ve come to really appreciate the conflicts that encouraged me to consult upperclassmen and consider other options such as courses in politics, philosophy, and absolutely legendary courses in our Religious Studies Department such as “The Holy Fool:Comic/Ugly/Madness” and “Experience of God.”

Today, I signed up for music classes, visited former professors, attended Intro to Cognitive Science, caught up with a close friend at Collins Dining hall, and then headed off to a new course offered by the Romance Literature Department: “Film, Literature, and the Cognitive Sciences.”

This course is taught by Professor Abecassis, a French professor who taught “Mimetic Desire in the French Novel,” which I signed up for because of raving reviews from multiple friends in that ID1 class. They could not have been more correct about the professor’s knowledge and passion; even though we simply reviewed the syllabus during the first class, the mere descriptions of the readings and films already gave me insight into the amazing connections I’m going to be seeing among media studies, cognitive science, psychology, literature, art, and so much more.

These were only a few of the questions with which he piqued our interest. 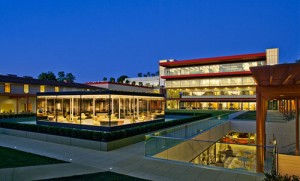 Then, I went to the third floor of the beautiful Kravis Center, where my philosophy classroom was in a glass cube overlooking Claremont McKenna’s and Pomona’s campuses. This in itself pulled my heart to taking the class, an instinct confirmed when the professor walked in and I instantly sensed that he was going to be the most hip and brilliant professor ever. And after an hour of going over something as typically dry as a syllabus, he intrigued me with his perspective on the relevance of philosophy to every area of our lives, the way he sold his area of expertise, the fascinating way he set up his course, and his grading system modeled after the concept of “leveling-up” in popular video games.

As of now, I already love three classes I’m in – and there are quite a few I’m looking into tomorrow! Guess I’ll go with the strategy of “take five, drop one”: I’ll enroll in five classes and drop one if necessary throughout the semester so I will still have at least four classes.