I took Introduction to Computer Science during the spring semester of my first-year. While I was far from skilled in the course, I still had great interest in pursuing the field as a possible career option. The constantly shifting and ever-evolving field of technology has always interested me, and even now I have a goal of being able to somehow add to the tech industry with my base-level linguistics skills and minimal coding skills.

So, in late February, when my professor started talking about upcoming conferences, I could not help but be interested. She recommended that our entire class look into both the Tapia and Grace Hopper Conferences. 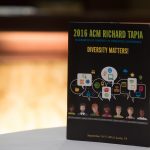 I was determined to attend at least one of the two, and, while Grace Hopper looked alluring (it’s the world’s largest gathering of women technologists, named for a pioneering woman computer programmer and inventor), the threat of being in one area with over 15,000 people was too distracting. I focused on Tapia, a conference named for Professor Richard Tapia and specializing in increasing diversity in all areas within the tech field.

After being able to secure a scholarship from the National Science Foundation that covered travel and the $600 conference ticket, I became excited. The funding gave me hope and told me that I didn’t necessarily need to be skilled in coding languages in order to have a future in technology. The conference seemed to appreciate diversity in all forms: gender, race, age, ability and thought.

The “AnitaB.org Community Meetup” highlighted networking opportunities for women in tech (computer scientist Anita Borg founded a digital community for women in computing in 1987). Panels and discussions like “Supporting Hispanics and Latinx in Computer Science” and “Racial Microaggressions, STEM identity, and impostor feelings: An analysis of Black engineering and computing doctoral students” tackled worries that many people of color have within the tech industry. 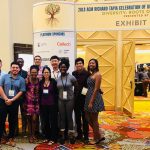 The conference was also diverse in how they provided discussions and participation opportunities for educators, professors, undergraduate and graduate students. For instance, while the majority of the booths at the career fair were recruiting undergraduate intern engineers and developers, there were a number of opportunities for graduate students that had to do with graduate programs at schools like Cornell and University of Michigan.

The Plenary keynote speaker, Shiri Azenkot, and panels like “Disability: Celebrating a Face of Diversity” were able to share different lenses on tech that opened conversation around accessibility in computing education and the tech industry, and whether or not companies are doing enough to recruit individuals with disabilities.

All in all, the TAPIA conference conceptualized “diversity” in a refreshing way.

With all of the different topics and discussions that the event promoted, I would encourage people of all backgrounds and experiences in technology to look into tech opportunities. The tech industry is shifting and is beginning to care more about giving more opportunities to people who do not have an exact pathway into the field.