Moving beyond mosaic tabletops and colorful couches, the lot of us had taken our seats at a table in the back. The booth was grand, tucked behind thick drapes and lavishly upholstered.

Our rowdy bunch eyed each other apprehensively. I knew that this moment would come eventually, but I thought it would happen after my own decision. I had not expected that the waiter would greet the 12 of us with a round of kumis, on the house. There wasn’t much I could do, but share one last dubious glance with my comrades, tip my head back, and down the fermented mare’s milk.

As a vegetarian with an aversion to dairy, the old milk of a wild steed was a whole leap and a half outside of my comfort zone. The bubbly beverage slid down my throat and coated the inside of my mouth, stinking of rotten milk and tasting no different. It was like nothing I had tried before: salty, sour, and distressingly cheesy. Every flavor was intensified by its sharply carbonated, alcoholic edge. Suffice it to say, kumis was not my cup of tea. 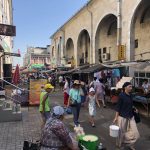 Last summer, I started learning Russian at Arizona State University’s Critical Language Institute, which  is an intensive language program in two parts: the first eight weeks are at the ASU campus in Tempe, where students cover two semesters of language and culture studies. The second, an optional extension, is four weeks in Bishkek, Kyrgyzstan, a post-Soviet state in Central Asia. Here, students live with host families and continue their studies in an immersive environment. The instruction in Arizona was superb—I learned more than I believed was possible in such an abbreviated timeframe. And although the transition to Kyrgyzstan was challenging, I made incredible progress in my short time there. 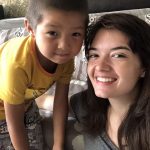 Although none of us wanted kumis again, Cafe Navat became a regular part of our routines. Every morning, we would leave our host families and trek to school, arriving early enough to share strange stories over cups of instant coffee at the cafeteria. At 8:30, we’d make our way to class, reconvening in the courtyard at 12:30 and making lunch plans. Cafe Navat, given its proximity to the school and delicious laghman (a savory central-Asian noodle dish), was a favorite. Our lunches together were a much-needed reprieve for me from the academic and social challenges that came with living in Kyrgyzstan after only weeks of studying Russian.

Most days, we would find ourselves at the school again in the afternoon for conversation practice. Our conversation partners were local university students who were hired by the school to speak with us three days a week for two hours. We used these sessions to paint the town, engaging in local culture while getting to know each other. My first session was a stressful disaster: I had flown out of Moscow that same morning, arriving in Bishkek at 5am and traveling another hour to meet my host family before class. I was exhausted and unprepared to be in an immersive environment. For two hours, I was an incompetent hot mess, incapable of uttering even a single comprehensible thought in Russian. Over time, however, these sessions became the highlight of my experience.

While my first conversation practice was inhibited by my pitiful attempts at small talk, my final conversation practice in Bishkek was not nearly as cringey. My conversation partner and I banded together with a few other conversation pairs and went out to Sierra Coffee, where the six of us crowded around a table for two and had a marvelous time in each other’s company. We were upbeat, colloquial, excited, laughing as we made jokes and talked over one another. This was a real conversation—not on rehearsed topics or following the script of a forced dialogue. I wasn’t practicing, I was performing. It was the first time I felt like I really spoke Russian. 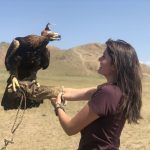 As I reflect on this memory at a similar cafe tucked away in the opposite corner of the world in California, I realize how far I’ve come. Yes, I still struggle to nail the grammar to speak about complex topics. Nevertheless, I am comfortable in the challenge, thanks to my time in Bishkek.