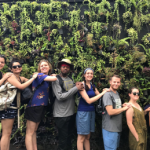 This past summer, I participated in Operation Groundswell. I was a “backpacktivist” in Thailand. Then, I explored Cambodia on my own. This coined term “backpacktivist” means to act as a guest in a place others call home. We were supposed to adhere to local traditions and customs, which allows us to understand the value of cultures different from our own. It opens the door for a greater understanding of our similarities, not just our differences.

This was an attempt by OG to take back and reflect on the backpacker culture. In fact, I met a lot of people that participated in just that. Lot of people were just abusing the native communities and exploring these countries to their own exploits. Tourists and backpackers have just taken over the region for decades. My goal was an attempt to be conscientious in my travels. I am from a very urban, poor community, so I understand exactly what it feels like for people to come and “give back” to my people.

Now, specifically on my trip, I spent 30 days in Thailand and about 10 in Siem Reap, Cambodia. A brief overview: Day 1-8 was my Orientation in Bangkok. I was met by the leaders of the trip at the airport. I came in not knowing much about the community nor did I know anyone going on this trip. It was 10 of us from around the US and Canada. We were introduced to Thailand’s bustling capital, Bangkok. We did a citywide scavenger hunt to  get to know the sights, sounds, smells, and tastes of this modern yet distinctively Thai city. Also, Temple hopping was awesome. Also, we helped with urban agriculture. 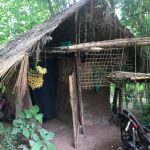 Day 9-13 we explored Organic Farming Adventure. It was a long overnight busing journey to Chiang Mai. Specifically, we went to Sahainan Permaculture village. This was my favorite part of the trip. We lived with no WIFI, electricity, nor modern things. We just farmed and came together as a community. Being stripped down to the basics helped me learn hands-on about principles of organic gardening, seed sharing, and self-reliance.

Then, Day 14-17 we cooked and explored Chiang Mai. There were Ancient temples, good cuisine, and a modern vibe. Day 18-23 was going to an undocumented village in the Hills with the Mirror Foundation. We went to Chiang Rai province. The Mirror Foundation is a Thai NGO working towards improving the livelihoods of underprivileged ethnic minority groups in the country. The traditional lifestyle was nice to experience and figure out in integrating a modern market-based agricultural society. Day 24-26

Fun with Elephants. We visited a nearby elephant sanctuary at Elephant Valley Thailand. We learned about an important conservation project aiming to put an end to the mistreatment of elephants in the tourism industry. We fed the elephants and saw them live naturally. Day 27-37 was my Independent Travel Time. I bused to Siem Reap. This was crazy because I was on my own and saw Cambodia in its rawest form. I lived in hostels and visited the place where they filmed Tomb Raider.

Finally, Day 37-40 was Disorientation in Bangkok. The group reconvened for a program debrief. Travelling is an inherently selfish enterprise – we do it for ourselves, for experiences and encounters that will enrich our own lives and broaden our perspective of the world. From this trip, I particularly decided to critically question the ethics and sustainability of backpacking. What impact does the backpacking community have on Thai and Cambodian culture and society? How do backpackers connect to places and people? How can we contribute our time in this part of the world in a more fruitful and productive way?