(Disclaimer: I apologize for frequently writing about my physical uncoordination. Speaking of, I got my first bike injury of the semester not that long ago. My knee was scraped pretty badly. Sad face.)

I never thought P.E. in college was a thing—it seemed so…juvenile to require students to exercise. Eughh. Like, what? Can’t us physically incapable people ever get a break? I only found out Pomona had a P.E. requirement after I enrolled. I felt betrayed, lied to. I didn’t want to re-live those days of embarrassingly finishing the mile last, trying to push my body off the ground with shaky twig-arms, jogging/dying across the gym to inappropriately upbeat music as I struggled to cross the line before that horrid beep rung in my ears (y’all remember pacers?). I had no hope—until I saw that table tennis (a.k.a. ping pong) was one of the P.E. courses offered. I have a severely underused ping pong table at home, and the class seemed low-key enough for someone like me. Maybe this would be a good thing.

The first day of class, I was surprised that there were so many non-Pomona students—the class was pretty evenly split between Mudders, CMC’ers, and Pomona…-ers. I was also surprised at how hot it was in the gym—the first few weeks in Claremont are pretty darn warm, so always carry a water bottle around and dress accordingly. I was also-also surprised at the skill some of my classmates already possessed—their serves were low to the table, they made quick returns, they played with confidence. Would I be able to catch up? No, no, I wouldn’t. But that doesn’t really matter because life shouldn’t be about becoming as good as or better than others, yo—it should be about improving yourself, first and foremost. And that’s certainly what I did.

Every Tuesday and Thursday after lunch, the class would meet, but it seemed more like a club than a class—it was way too fun to be for credit. Over the semester, I learned how to properly serve (the ball must be thrown six inches in the air with an open palm!), how to add spin to the ball so that it is more difficult for your opponent to return, how to effectively smash, and many, many other techniques. It was a bit embarrassing, as someone with my skill level, to play against classmates who had a lot of ping pong experience, but everyone was incredibly nice and gave me pointers. Another life lesson—if you never step out of your comfort zone, you’ll never learn anything new!

One Wednesday night, our teacher took us to a ping pong club at a senior health center in Pasadena. The club is run by Wei Wang, a former U.S. Olympian who was a consultant in films like Forrest Gump and Balls of Fury. There were a lot of older folks present, but their age had no impediment on their playing ability. Five students from my class went, and none of us were able to beat any of the older players. We also had the chance to play a doubles tournament, with a college student pairing up with a senior citizen. Our teacher paired up with someone too, and they ended up winning the whole thing. 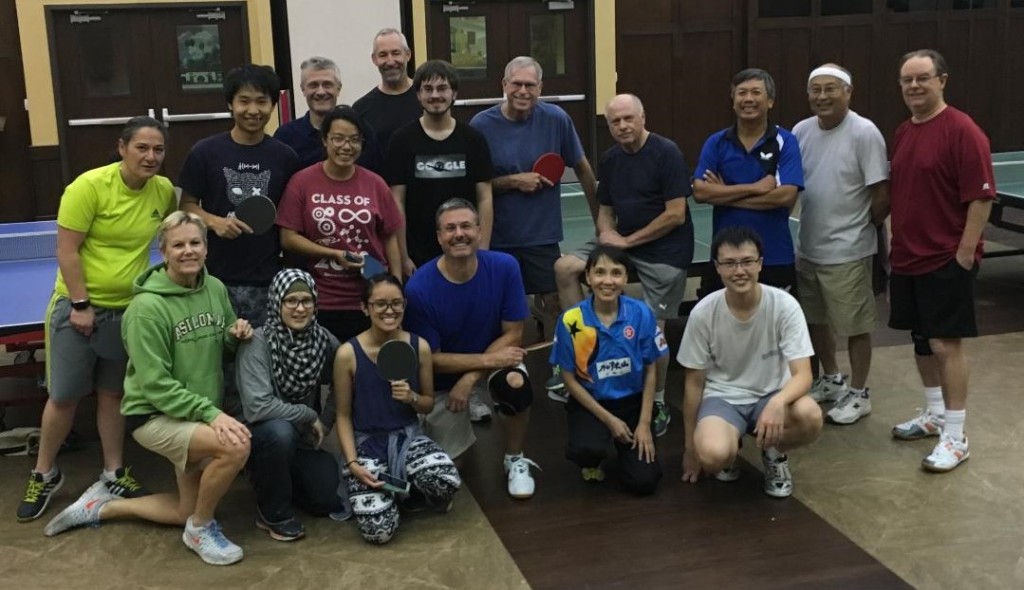 The last few classes, we had an in-class tournament. We were split into two teams. Since there were mostly Mudders on my team, I suggested our name be something related to engineering. Someone suggested Right Hand Rule, since we’re all right handed, and because the gesture for the Right Hand Rule is pretty intimidating. (For those who don’t know, the Right Hand Rule depicts vectors in three directions, and in physics is used to determine the directions of force, electric current, and magnetic field.)

I recently called my younger brother to brag about all that I learned this semester. I told him that I was eager to return home so that I could show off my skills. My brother used to pester me to play ping pong with him, but since he was so much better than me, I didn’t usually like to. Now, I asked if he thought I stood a chance, to which he responded with a firm “No way.”

Let’s just say what I’m looking forward to the most about returning home for winter break is beating my brother’s butt.