“OA, OA, OA. OA, OA, OA!!” The booming chants of the Pomona students traveled all across campus, gaining volume as us first-years filed anxiously into the Greek Theatre on South Campus, eagerly awaiting instructions and information regarding  Orientation Adventure, also known as “OA.”

“OA, OA, OA. OA, OA, OA!” The merry yells of the OA leaders seemed to go on endlessly, never ceasing in excitement or happiness. Man, OA must be pretty awesome… I thought to myself as I walked with my friend Angel (a fellow Fall 2019 POP attendee) amidst all the other chattering first-years. We also happened to be on the same Orientation Adventure, Yosemite-Bridalveil. I was so beyond excited, but I couldn’t suppress the intense feelings of utter anticipation and nerves bubbling to the surface of my being. This was it, the very first time we would be meeting and hanging out with our fellow classmates in the Pomona Class of 2023. I was ready.

Now, for those who don’t know, OA or Orientation Adventure, is something all first-years do, and the trips are led by a few upper-class students who are called the OA leaders. First-years are given a range of choices to pick from such as Yosemite National Park, Sequoia National Park, Kayaking, Surfing, Beach, Community Engagement, etc., and they must rank them from most preferred to least preferred choice over the summer before coming to campus. I was blessed to get my very first choice: Yosemite. My roommate wanted Yosemite and ranked it as her first choice too but she didn’t get as lucky as I did (she told me Lake OA was still a blast though!).

The next morning of our departure, the air was hot and sticky with late August humidity, but we filed onto the buses at 6am to begin our adventure .Yosemite is a 7 or 8-hour bus ride from campus which sounds terrible, I know, but it was honestly some of the most memorable and fun hours of the entire orientation trip and my first year in general. To say I was tired would be an understatement; it was the earliest I had woken up since high school… 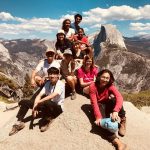 After several minutes of severely awkward icebreakers, name games, and “get to know each other” questions about our majors, hometowns, favorite food, etc. (they’re inevitably awkward but the REAL bonding comes on the bus ride there I promise you), I had finally met everybody on the Yosemite OA, and we were finally on our way. After seven-and-a -half rapid hours (I know, sounds impossible, but trust me: with the right people and the right music, any amount of time seems to fly by) we arrived at our campsite, and I just knew that this OA group was going to blossom into something extraordinary. Our OA leaders were absolutely amazing and the vibes just felt so right, for lack of a better description. We spent the next four days waking up at the literal crack of dawn (okay, 7 a.m., but it felt so so early on my inner summer-mode alarm clock) when it was ICY cold (I’m talking 35 degrees and colder and I’m from New Jersey, so trust me, I know the cold). We had mesmerizing hikes planned, viewing sights such as the famous Half Dome and endless breathtaking waterfalls, miles of forests and crisp blue sky. I had no idea exactly how incredible this trip was going to be and how it would prove to be the absolute perfect “prologue” for my time at Pomona. I was astonished.

One of my favorite memories of my entire first year at Pomona comes from OA, when my “OAblings” and I (similar diction to “spiblings”, which I mention in other blog posts) cramped around the dog-eared picnic table that rested in the middle of our campsite and, through various card games, laugh freely into the inky, cloudless night. It was so magical, I can still imagine the exact way I felt, the people I was sitting next to, the conversations we had, and the laughter we shared to this very day, almost a year later, because it had such an impact on my time at Pomona. I will forever have these memories, even if they only lasted four short days.

Many hours of hiking, swimming, shivering, card playing, marshmallow roasting and dish washing later we were aboard the large bus that would take us back to our new home. I was ready to leave only because I knew the adventures that waited for me at Pomona were going to be miraculous and exciting because of the miraculous and exciting people I would share my next four years with. Many of my very best friends at Pomona were people I met on my OA, and I am so blessed and grateful to say that. And I know I may be a little, tiny bit biased but Yosemite OA is undoubtedly the best OA, not only because of it’s remarkable location, but because of the invaluable friendships and irreplaceable memories we created on this trip.

We all decided to take the same picture on this outcrop of a gorgeous mountain we hike to the top of and post it on Instagram with the caption: “Alexa, play Yosemite by Travis Scott”.

We all have that very picture on our instagrams and I will remember that moment, and more importantly the people, for my years at Pomona to come.