I don’t know how to draw. My hand’s way too shaky, it’s a lot of work, and half the time I don’t have the confidence to start on a project, let alone keep going after I make a mistake. But the funny thing about the pandemic, especially the pandemic during summer vacation, is that it forces you into such deep boredom that you’re willing to give every failed hobby a second chance.

Microsoft Paint is a truly horrendous place to find inspiration, with its limited brush and shading options, pixelated look, and, in my case, lack of pencil, but one sunny day I decided to pick up my mouse and draw a tree. The idea arose from the fact that my high school friend group, nicknamed “Film Club” for our love of movies, was never able to take a picture with all of us in it. It was a playful running joke that turned sour as the possibility that we’d eventually take a photo together  became more and more unrealistic as social distancing raged on and people started to leave for college. 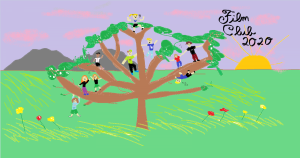 Frustrated with our dilemma, I decided to do something about it. I would draw a nice portrait of us hanging around the tree behind my friend Audrey’s house, and we would finally find closure. How did it turn out? Well, I suppose you can judge for yourself. I mean, it’s definitely a drawing! I especially like how I was too lazy to press the fill bucket a couple more times on the tree, so there’s just a bunch of specks of the void permeating each branch.

It was atrocious. But it was ours. Even while I was making it, I felt such joy in portraying each of my friends and their personalities in tiny little cartoon grins and waves, creating a world free of a pandemic or stress (or fingers, apparently).

And my friends loved it too. I saw that they didn’t care about the lack of detail, setting it as phone wallpapers and hyping me up to make more. And it showed me that I didn’t have to be some kind of DaVinci to make my friends smile. I kept going, depicting our most memorable times spent together in the same goofy style, and each time I added more features here and there, experimenting with my newfound hobby. As summer neared its end, I wondered if I’d keep up with my therapeutic outlet, or if it’d fall to the dusty pile of pandemic boredom-killers as I moved forward with my life.

Fast forward a few months, and I had joined ASPC, our student government group, as a member of our President’s personal First-Year Committee. It was something I had always been a part of in high school, so when looking for extracurriculars early on, I figured I’d start with something familiar. We were promptly assigned to a team, and I was charged with the task of co-running our group’s Instagram account, along with my buddy Brandolyn (sometimes known as Brando, who is now a close friend and is pictured in my previous blog post!). Both of us had seen enough bland corporate insta accounts to know that there was no way we were going to be tethered to the same type of passionless grind for an entire year.

After a bit of brainstorming, we decided to go with an interactive approach, opting to center our focus around a series where we spotlit other first-years around the world and interviewed them with icebreakers in order to put a few more names to faces in a year when most people only really knew 5-10 of their classmates from various school events. We called it “Pomona Pals,” and put our attention towards finding a snappy way to advertise each episode.

Thinking back to how my high school friends appreciated the sentiment I put into my summer drawings more than the polish, I thought I might have an idea, although I was a bit nervous. I started out by making a draft of Brando and I with Cecil, suggesting that we could even just use them as a simple decal for our holiday and event posts. 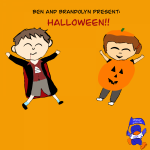 Again, they were rough, but Brandolyn loved them, and really pushed me to continue with the idea. I showed them to Andy, our president, and even a few of my new Pomona friends, and all of them were so supportive that any anxiety I had about showcasing my work was outweighed by the positivity and love that I received. I thought we could combine the drawing idea to create posts that felt like a labor of love, and not just some afterthought spat out by a faceless organization. Andy greenlit the idea, and we were rolling!

Equipped with a new Apple pencil and a slightly more detailed app to draw on, we drew more and more of our classmates, always met with a smile and a heartwarming message. Being a new first-year myself, it was such a shock to be immediately validated in a pursuit that I was only half-sure about in my own mind. I really shouldn’t have been so surprised that going to Pomona, a place that encourages everyone to try literally everything, would mean having classmates that carried the same ideology, but I didn’t think it would take hold so early on! 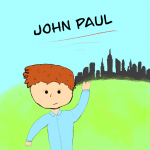 As the year progressed, we even started interviewing (and drawing) faculty and staff in order to introduce our continually-isolated class to the people they would soon have to choose as mentors over the summer and for class registration. We finished the year strong, and suddenly I had no more projects; the half-finished canvases in my drive were completed and archived. It was hard to tell if the account reached many people, or if it was even that helpful for those suffering much tougher challenges than could be remedied by a few Instagram posts, but as I scroll through the wall of color representing each interview and collaboration behind our classmates and committees, I hope it will be an encouraging retrospective that shows we, as a class, didn’t give up on a positive outlook. 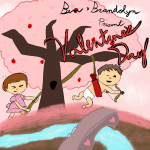 I still don’t really know how to draw. My hand still shakes, and I use that “undo” button a little more than I’d like to admit. But one thing that’s changed since I was a frustrated senior is that I’ve been enabled to try things for the sake of trying them. To be okay with failing, and to be confident in my pursuits. To be painfully corny, I suppose I put the “Art” in Liberal Arts during my first two semesters at Pomona.