I was clueless about everything when I started my first year at Pomona. As an international student from South Korea, I didn’t know what to expect from going to college in the United States. I was happy to get into a good liberal arts college, but I was terrified that I would face a steep learning curve with very little preparation.

Looking back, I didn’t have to be as afraid as I was. My first-year experience taught me to ask for academic support when I needed it. 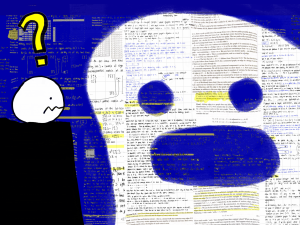 Last spring, I was convinced I was going to do horribly in Combinatorics, an upper-level math course. The material suddenly stopped making sense when the class reached the last chapter of the textbook. I had no idea how to answer the homework problems. As the final exam approached, an impending sense of doom built up in my mind, which made it even harder to catch up. I’m interested in becoming a math major, so failing Combinatorics was the last thing I wanted to do. Nevertheless, things were spiraling down, and I had no idea how to pull myself out.

I blamed myself for this outcome—I thought I should’ve reviewed more thoroughly, attempted more problems, and so on. I had no idea how to ask for academic support because I wasn’t used to having support available. I didn’t realize I wasn’t being fair to myself until Vera, a junior math major, gave me perspective.

I spotted her at Frank dining hall. Desperation squeezed enough courage from my mind to explain my situation to her and ask for help. To my surprise, she told me the professor would be willing to help, which helped me overcome my fear to reach out to him. She also shared that she was struggling in her Abstract Algebra class too. Her advice made me realize I wasn’t the only one feeling lost in a college math class; I could and should ask for support.

I mustered up another dose of courage to message my Combinatorics professor. I explained that I was struggling to keep up with the class and asked for a homework extension to catch up. I didn’t expect him to give me the extensions (he’s well known for his strict homework policy). In fact,  I was terrified when I pressed the send button because I thought he would just tell me to do more work on my own. However, to my surprise, he said “yes.” Moreover, he added, “don’t panic about the final exam. You’ll have enough time to prepare”.  His words lifted a great deal of fear off of my chest. The extensions gave me time to revisit the previous chapter, which gave me a better foundation to understand the parts I was struggling to make sense of. Encouraged, I also reached out to a class mentor to talk through problems I had no idea how to solve on my own. When I talked the problems out, they started to make sense in my mind. The last chapter stopped sounding like alien language. The joy I used to feel in this class came back to me.

I was emerging from the downward spiral I hadn’t expected to get out of. When I walked into the final exam, I felt reasonably prepared. I walked out satisfied with the effort I had put in, and I finished this class with an A. Combinatorics was one of the hardest A’s I earned, but my experience taught me how to utilize support in the face of an academic challenge. College classes can be scary, but I believe you will learn how to float, just as I did.