This fall, I spent my midterm season thinking about Joshua Tree; the promise of Fall Break was the light at the end of a hectic week of essays and exams. With two extra days off class, some friends from my first-year sponsor group planned a camping trip at Joshua Tree National Park, which is only about an hour and a half away from campus. On Sunday afternoon, after stuffing the car with enough food and clothes to last us much longer than our intended two nights away, we merged onto the I-10 and drove east. 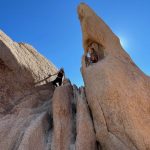 Driving into the park was surreal. The landscape is unlike anything I’ve ever seen before, with the possible exception of Radiator Springs from Disney’s Cars, which we repeatedly referenced throughout our trip. The desert stretched out for miles on either side of us, framed by the distant mountains, which glowed orange as we drove in through the sunset. Massive rock formations broke up the desert with structures that looked like faces, women sleeping, and clam shells; it felt like we were little kids watching clouds, trying to make shapes and stories out of all the rocks we drove by.

Of course, it was amazing to see the Joshua Trees themselves. They’re bigger than I expected, with thick branches that reach outwards throughout the miles of desert. One of my friends was surprised to see multiple Joshua Trees at all; he thought the park was named after a singular Joshua Tree, isolated in the middle of the desert, the only one of its kind to grow. To be fair, upon reflection it does seem potentially misleading that the park is called Joshua Tree singular, though “Joshua Trees National Park” doesn’t have the same ring to it. 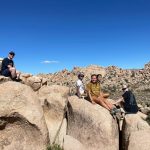 We stayed at Jumbo Rocks Campground in the middle of the park with gear we rented from Pomona’s Outdoor Education Center. There is so much to do in Joshua Tree, too much to accomplish in just a weekend, but we certainly gave it our best effort. We were able to cross off a lot from the Joshua Tree to-do list, including hiking Ryan Mountain and Warren’s Peak, seeing Skull Rock, and watching the sunrise though the Coachella Valley at Key’s View, but there’s still enough to see and do that I’m already excited for the chance to go back.

After three days clambering over rocks, hiking through the desert, and falling asleep looking at the stars, I returned to campus feeling refreshed and inspired to take a geology class. Visiting Joshua Tree has been a bucket list item of mine for many years, and I was so excited for the opportunity to see it with my friends. I’m grateful for the time I had to explore and relax during our precious time off and am already looking forward to the next Southern California adventure.