I had long looked forward to my high school graduation year, 2020, as a year of opportunity and excitement, not anticipating that many of my plans would have to be rewritten. Just as I never imagined I would live through a pandemic, I never envisioned myself taking a gap year – yet that is exactly what I did.

Instead of attending Pomona College virtually from my house, I embarked on a gap year full of untraditional learning experiences. While I couldn’t travel abroad, I learned more about the incredibly rich history, culture, geology, and diversity of my own state and country. 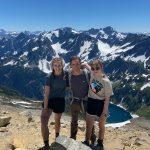 Over the summer and fall of 2020, I backpacked over 500 miles, 350 of which were on the Pacific Crest Trail. My backpacking adventures led me to Washington state’s three national parks: Rainier, North Cascades, and Olympic. In doing so, I hiked through the Hoh Rainforest, the only temperate rainforest in North America. Moss dripped from ancient Douglas Fir trees, gray rivers churning with glacial silt wound through the valley, and black bears shyly peered from behind thick foliage. I traipsed through the Pasayten Wilderness, the only arctic tundra in the lower 48. Summiting Armstrong Mountain, I stepped into Canada, looking down at the international border carved through the forest. 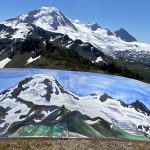 I explored iconic geographic landmarks, such as Dry Falls, which was carved by the Ice Age Floods more than 13,000 years ago and was once a waterfall four times the size of Niagara Falls. In autumn, I wandered through forests of larches, mountain evergreen trees that are in fact deciduous. The blue mountains were awash with golden larch trees, their yellow needles turning the trail into a Yellow Brick Road. I carried my watercolor journal with me, doing my best to capture the stunning views with my paints. In the winter, I snowshoed on Mount Rainier, an incredibly tall, glaciated volcano famous for its alpine meadows and majestic beauty. I also learned how to be safely independent in the outdoors, completing a solo backpacking trip in the Alpine Lakes Wilderness.

My outdoor adventures led me to scientifically and historically important places as well. While driving to a trailhead, I stopped at a massive radio telescope in the remote town of Brewster. This telescope is part of a 10-dish telescoping system called the Very Long Baseline Array, which produces images hundreds of times more detailed than the Hubble can produce. I also visited Hanford Nature Reserve, the most radioactive place in the US. Plutonium manufactured there was used in the first nuclear bomb, and I glimpsed the silvery husk of the B Reactor, the first full-scale plutonium production reactor in the world, a dot on the wasted landscape. Unfortunately, the radioactivity did not give me superpowers. 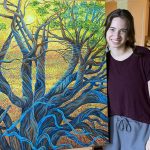 While on the trail, I read classics such as Walden, Jane Eyre, East of Eden, Wuthering Heights, The Count of Monte Cristo, Little Women, and, my favorite, The Grapes of Wrath. While at home, I learned how to cook French cuisine, including ratatouille, salade Niçoise, crêpes, coq au vin, and soupe à l’oignon. I also completed several paintings inspired by the breathtaking scenery on my backpacking trips, wrote songs on the piano and guitar, and tutored students from my local high school in English.

Although I didn’t have a “typical” gap year experience of traveling abroad, I came to have a greater appreciation for the monumental scale, remoteness, and diversity of Washington’s world-class wilderness. I learned how to be independent both in the great outdoors and in giving back to my community. I am grateful for my gap year because it allowed me to enter college as a mature, curious, and experienced student eager to enter the world of academics.