You’re one of the 50 Pomona College first-year students who came early to campus. It’s nighttime, and you’re bored. The Village is closed and you and your friends don’t own a car to travel outside of Claremont. What’s a better idea than going out at night and walking around campus with your friends?

It was my third night in Claremont. After going through a mental breakdown the two previous nights, crying and reminiscing about my life back in Guatemala, I decided to distract myself by doing activities with my friends. During International Orientation, my friends and I toured some of the 5C schools such as Claremont McKenna, Scripps, and Pitzer. However, we didn’t have the chance to tour Harvey Mudd. After a long karaoke session, my friends and I started to walk toward Harvey Mudd. 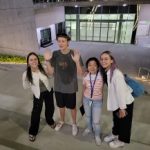 We had mixed opinions. According to Google Maps, it approximately takes 13 minutes to walk to the closest Harvey Mudd building which is a longer walk than we expected. But at the same time, we were excited to see the modern-tech-vibes buildings that people described to us.

We started walking passing by the Kravis Center at CMC and Scripps’s beautiful Italian- like buildings. After 17 minutes, we reached Harvey Mudd’s dining hall, the Hoch. Most of us were mesmerized by the college’s modern architecture that the college had.

I wandered around alone to discover the underground basements that I heard about from students who attend Harvey Mudd. Supposedly, there is an underground basement built for an evacuation, in case there was a missile or an atomic bomb attack. I’m assuming that it is secretive and protected from the rest of the 5Cs. I headed towards the Parsons Building of Engineering that is also connected with the underground basement but failed to get in as I didn’t have card access to the building. This made me realize that next time I need a Harvey Mudd friend to continue with my scavenger hunt.

Something that I noticed and wished is that Harvey Mudd could have had more trees on their campus. It could have combined well with their brick-colored buildings.

After taking a long break and taking pictures of the campus, we headed back to Pomona. I was walking beside my friends, Federica and Anastasia, talking about our ambitions and our excitement as future Sagehens while looking at the comet that was streaking across the sky. The walk around Harvey Mudd made me realize lots of stuff. (1) I have officially toured all of the 5C campuses. (2) I wasn’t the only person who left their family from one country to another to experience a new culture. Indeed, all 50 of us international students were not alone on this journey, and we have each other’s backs.